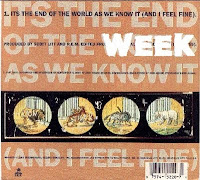 Three weeks into this grand blog experiment called Five O'Clock Friday and I've already missed a post. And I can't even remember why I missed it. I'm sure there was something of great importance.

Three weeks ago when I introduced Five O'Clock Friday I wrote, "Over the next few weeks I'm going to catch everyone up on the first half of the year, month by month. Then it will become a summary of each week's reading. At least that's the plan." I still think it's a good plan, but missing a week is strike one. Three strikes and ... time to come up with a better plan.

So let's backdate this post to last Friday, have a new post this Friday, and see how it goes from here. Thanks for stopping by Help Readers Love Reading.