When You Reach Me by Rebecca Stead

Miranda's mom is going to be on The $20,000 Pyramid on April 27, 1979. Miranda knew, of course, that something important would happen on April 27, 1979 at Studio TV-15. After all, the other proofs written in the cryptic note she received were true. "Christmas Day: Tesser Well." Mysterious, but true. And "3 p.m. today: Colin's knapsack" the day she received the note. Also mysterious, and also very true.

More accurately, someone else knew these things would happen. Miranda only knew because she received the note.

Miranda received several notes. The first note said "I am coming to save your friend's life, and my own” and requested a return letter from Miranda, even though the note is unsigned. The second note asked Miranda not to tell anyone about the notes and reminded her to write the letter. The third note offered the proofs.

The notes add to the complications in Miranda’s life. Her best friend since forever, Sal, who lives in the apartment downstairs, has suddenly stopped being friendly. She begins a new friendship with Annemarie and Colin. A homeless man, called the laughing man, moves into her neighborhood. Middle school troubles – from first jobs to friendships to getting a class project proposal approved by Jimmy Stringer, head of the class Main Street Planning Board – are all part of Miranda’s life and are all accurately portrayed.

A Wrinkle in Time by Madeline L’Engle is Miranda’s favorite book. It’s been a favorite of mine too, so I was intrigued by Miranda and Marcus’s discussion about when Meg and Calvin return home in the book. Marcus, a neighborhood boy, explains, “So if they had gotten home five minutes before they left, like those ladies promised they would, then they would have seen themselves get back. Before they left.”

Which leads me to this: A traumatic event occurs in a person’s life. This tragedy affects the person so immensely that it creates a personal desire to change the event. The person seeks to discover the secret of time travel and succeeds. He then he travels back in time to prevent the tragic event from ever happening.

So now, with the tragic event no longer occurring, doesn’t the impetus to seek out the secret of time travel disappear, causing the traumatic event to once again occur?

It’s a disruption in the time/space continuum worthy of Doc Brown.

Then again, kids are geniuses when it comes to suspension of disbelief. (And don't we still love Back to the Future?) Adults are just so … so … well, they’re just so grown up. When You Reach Me is a page turner, most certainly. I only came up with my grown-up thoughts the next morning while getting ready for school, certainly not while I was reading. I was too captivated.

Kids will be too.

Then again, wouldn’t it be easier to just take one simple step to the left? It works for this girl.

I wonder if Rebecca Stead is a fan of Relient K.
Posted by Brian at 8:45 PM No comments: 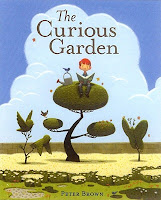 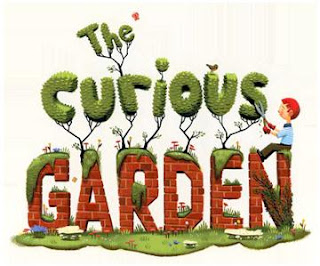 Title page image from http://www.peterbrownstudios.com/.
Posted by Brian at 9:32 PM No comments:

North! Or Be Eaten by Andrew Peterson

The Wingfeather Saga continues in North! Or Be Eaten, sequel to Andrew Peterson’s first novel, On the Edge of the Dark Sea of Darkness. Janner, Tink, and Leeli Igiby have learned the truth about the Jewels of Anniera and the Wingfeather family. So, unfortunately, have the evil Fangs of Dang, henchmen of ruthless ruler Gnag the Nameless. Glipwood Township, the only home the Igibys have ever known, is but a remnant of what it once was, mostly destroyed by a storm the night they escaped to Anklejelly Manor and is deserted by nearly all its occupants.

The Igibys, along with Podo, Nia, Nugget, and Peet the Sock Man, are at Peet’s castle preparing to flee to the northern Ice Prairies and the increased safety brought by its freezing temperatures. The Fangs, unable to manage the cold, will be unable to pursue them. Nearly all their preparations must be deserted, however, when they receive warning from Oskar N. Reteep, a friend thought to be dead, of another betrayal by Zouzab the Ridgerunner.

The Fangs are coming for them. Now.

The Igiby journey is rife with adventure and close calls. The family narrowly escapes Fangs and trolls and a gargan rockroach and snickbuzzards and even a toothy cow of Skree. Or two. They face the dangers of Dugtown, the Stranders of the East End, and a fork factory so horrible it earns two exclamation points, as in Fork! Factory!

But after the events of Book One, adventure in Book Two is a given. Seeing the Igiby children grow as they face new responsibilities and dangers, not only as people, but as royalty, is where North! Or Be Eaten excels. Janner’s reluctant acceptance of being Throne Warden, coupled with shaky confidence in fulfilling his call, has him walking a fine line between honored Throne Warden of Anniera and the despair of Artham Wingfeather, previous Throne Warden. Tink simply longs for the lost peace of the Igiby cottage and refuses to seize his role as High King. Leeli transforms from little sister to one who brings confidence to her family and calm maturity to times of distress.

Podo, Nia, and Peet don’t show growth as characters as much as their true character is revealed. Podo’s pirate past, thus far only casually mentioned, becomes a major factor in whether the Wingfeather legacy will continue. Nia gently slips back into her previous role as royalty, and the mystery of Peet’s past comes to the forefront as he must either give in to despair or move ahead in a new role.

Darker than its predecessor, North! Or Be Eaten draws readers into the hopelessness of Skreeans without allowing readers to completely lose hope themselves. The magnitude of Gnag’s evilness is infinitely clearer, but through it all is a family who refuses to give up, believing their quest to reestablish a kingdom of good can ultimately prevail. The family is not perfect. Individuals make decisions that clearly won’t move them toward their goal, but a loved one is always there offering encouragement and forgiveness.

Together is the only way they can succeed.

Additional thoughts can be found at Help Readers Too!
The Character Angle
The Bigger Picture Angle
The Darkness Angle
The Ain't It Creative Angle
Posted by Brian at 5:07 PM 2 comments:

I spent mornings at Camp Graduate Work (although I don't have a single beaded coin purse to show for it) and afternoons visiting the various attractions in and around New Job Amusement Park (I rode the technology training ride, the TB test thrill ride, saw Bennie and the Insurers perform, and even spent time in their new hands-on section, "Paperwork Parade.")

It's been a hoot, I can assure you.

But imagine my surprise when I returned to the welcome arms of my online home and found my meticulously made Gone Fishin' sign lying on the ground. I feel like I ran off and left readers wondering where I was and when I was going to return. Accept my apologies! And rest assured, if I run into the local youngsters responsible for these shenanigans, I'm goin' Gary Paulsen on 'em and they'll all end up with library cards.

Reviews are coming. They are. (Famous last words ... at least I didn't use "I promise.") I have been reading books. I just haven't been writing about them.

In the meantime, here's a link to my latest newspaper column about one other summer trip. Here's the printable version.
Posted by Brian at 7:26 AM No comments: