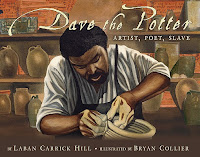 I know that the Caldecott awards are given for illustrations in picture books, but I was quickly caught up in Laban Carrick Hill’s story of Dave the Potter, an artist who created pots to hold grain, salted meat, and memories. A poet who, in simple two-line compositions, etched history and complex ideas into his creations. A slave with a skill possessed by very few people, let alone other slaves.

Bryan Collier’s illustrations certainly play a role in drawing readers in. Each picture is deep and rich, seemingly made of clay themselves, and take readers through the entire process of making a pot as a potter would in early to mid 1800's. Readers can see the pride and care Dave put into each pot and jar.

The book ends with three pages of details about Dave’s life and work mixed in with examples of his poems that are etched into the sides of his pots. There is also a full page with the author’s and illustrator’s notes explaining how they each learned about Dave the Potter and how the book came to be.

Dave the Potter shares a small piece of American history that few people know (at least I didn’t know about it) and middle and upper elementary teachers can use the book as a resource for Black History month, art and pottery, and even poetry.
Posted by Brian at 6:10 AM No comments:

Ling & Ting: Not Exactly the Same! by Grace Lin

Grace Lin follows up her 2010 Newbery Honor for Where the Mountains Meet the Moon with a 2011 Geisel Honor for Ling & Ting: Not Exactly the Same, showing she can write excellent books for beginning readers as well as novels for the older ones.

Ling and Ting face the same problem as many identical twins. Everyone thinks they are exactly the same, but they always insist, “We are not exactly the same.” Even the barber says so when they go for their haircuts. But Ling sits still for her haircut while Ting fidgets. When hair falls on her nose …

If people thought they looked the same before their haircuts, they’ll make no mistake now that Ting has a chunk missing. Right in the front.

The book is divided into six short stories about Ling and Ting, and after the first one, Ting is always missing that chunk of hair. Next, Ling attempts a card trick. Then the sisters make their own dumplings, proving again that they are not exactly the same when one sister makes dump-Lings, while the other makes dump-Tings. Not even their chopstick ability is the same.

It’s when Ting goes to the library that the fun really starts. Ting’s fairy tale book reminds her of something important: her card from Ling’s card trick back in the second story. The final story, entitled “Mixed Up,” then brings in parts of all the previous stories, as Ting makes up a story about two twin girls. Ling is sure she knows this story, and readers will be too, but Ting’s version will have readers laughing right up to the end.

Beginning readers - and the grown-ups who read with them - will love Ling and Ting. Fans of Bink and Gollie, Cowgirl Kate and Cocoa, and Fly Guy will add Ling and Ting to their pile of favorites, and they’ll be watching for more Ling and Ting books in the future. (And so will I.)
Posted by Brian at 6:04 AM No comments:

My latest newspaper column is out today, and it's all about the people who go out in public without children. Some of these folks have grown children. Others have no children. Some are just lucky enough to be able to drop off their children at Grandma's house while they head to the supermarket. And since they don't have any children under their direct and immediate jurisdiction, they take the opportunity to keep an eye on your children.
Here's the original article at the newspaper's site. Here's the printable version.
When parents take their children out in public, their eyes are on their children.  Parents must always be ready to replace the taken, repair the broken, repeat the spoken, and, well, let’s face it.  Kids can be bulls and the world their china shop.

On those infrequent occasions when a parent’s eyes rise above 36 inches to look at their surroundings, they’ll notice that theirs are not the only eyes on the children.  The world is watching. Watching, and holding tightly to their Blue Willow.

Yes, the world is full of watchers, but their methods of observation are as varied as fish in the sea.  Watch the watchers.  Eventually you’ll see them all.

The Smiler - Always has a pleasant smile, no matter the situation. Will describe a three-year-old who’s pulling heads off Barbie dolls as “energetic.”

The Scowler - Brow always furrowed; sees no good in children’s actions.  Also generally suspicious.  Will think a well-behaved child is “looking for something.”

The Nodder - Head bobs north and south in understanding.  Believes children will be children and accepts it.

The Shaker - Head shakes east and west in frustration.  Believes children should be miniature adults.

The Nostalgic - Eyes misty, the nostalgic reminisces about her own children, often with one or both hands over her heart.

The Dreamer - Eyes misty, the dreamer’s gaze flutters between your children and her spouse, communicating a “someday, honey” message.

The Forgiver - Known to say, “That’s okay,” sometimes followed with “sweety” or “sweetheart.”.  A child may commandeer a grocery cart and promptly clip an unsuspecting shopper’s ankles, but the forgiver will wince, whisper “That’s okay,” and limp off to the produce section.

The Forgetter - Does not remember A. being a child, B. having a child, or C. the scientific fact that all life begins before adulthood.  Is known to make comments about animals in the wild “eating their young.”

The Peeker - Wants to watch the children, but doesn’t want you to know. Often found behind menus, newspapers, and church bulletins.

The Starer - Will stop all other activities to gawk at the perceived spectacle your child creates.

The Helpful - Will hold a door, carry a bag, and pick up yogurt containers tossed on the floor by toddlers.  Often a smiler.

The Helpless - Wants to help but is unable. This person often has his own children and can’t risk being distracted.

The Empathetic - Will cringe at certain behaviors shown by children, not because of the behavior, but because of knowing the Scowlers and Shakers nearby won’t be happy.

The Rocker - Attempts to calm another person’s crying child by gently rocking herself, sans child.

So watch away, you Smilers and Scowlers, Peekers and Starers.  Enjoy the show because one day you’ll have children or grandchildren out in public, and wouldn’t you know it?  They’ll behave like children.

And we’ll be watching.
Posted by Brian at 7:04 AM No comments:

We Are in a Book! by Mo Willems

Elephant and Piggie have shared the spotlight in twelve books prior to the release of We Are in a Book! (and more to come). Twelve stories featuring birds on heads and party invitations, dancing and throwing and sneezing and flying, and new toys, new friends, and new surprises. Now finally, in lucky book number thirteen, Gerald and Piggie realize that the spotlight is on them.
Piggie: Someone is looking at us.
Gerald: Who is looking at us? A monster?
Piggie: No. It is … a reader! A reader is reading us!
Piggie explains how books and speech bubbles and words work, and the two friends revel in the incomparable coolness of being in a book. Then Piggie wants to have a little fun with the reader - and with Gerald. Piggie decides that the ultimate in hilarity would be to make the reader say a word.  That word?
“Banana.”
See? You’re giggling already. Piggie was right. But when Gerald learns that books have endings, he panics. He doesn’t want the book to end. Thankfully, Piggie has the perfect solution, a solution satisfying to Gerald, Piggie, and readers. One that causes Piggie to say: 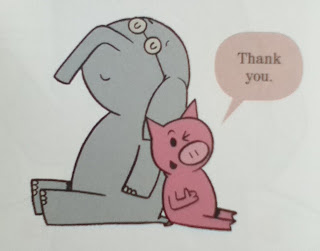 Heart of a Samurai by Margi Preus

At the beginning of Heart of a Samurai, in 1841, Manjiro is a fourteen-year-old fisherman.  Over the next twelve years of his life he endures a shipwreck, is rescued by American whalers, spends years at sea, and explores both coasts of North America.  At the end of the book he is a man in his mid-twenties, still motivated by his overwhelming desire to return to Japan.

The book is divided into five parts.  After being shipwrecked on a deserted island (part one), Manjiro and his fellow fishermen are rescued by barbarians - westerners, as seen by the Japanese.  Part two tells how Captain William Whitfield of the whaling ship John Howland quickly recognizes Manjiro’s eagerness to learn.  Manjiro learns English, the economic importance of whales, prejudice, and the Captain’s inability to take him back to Japan.  Now calling him John Mung, Whitfield offers to take Manjiro home with him to New Bedford, Connecticut.

That’s a lot of ground (and water) to cover in just under 300 pages.  Just like the novel’s main character, Heart of a Samurai doesn’t stay too long in one place.  Readers must pay close attention to the passage of time.  Many chapters begin by giving a month and a year.  At other times a chapter’s opening paragraph will pass six months.  Chapter 20 begins with “Winter was quiet.” Five lines later it says, “But spring brought ...”  Readers may not know, for example, that whaling voyages literally took years, so missing the passage of time may lead to confusion.

At the same time, the novel’s fast pace never leaves readers in one spot for long.  Manjiro moves from whaling to school to whaling to gold rush, and readers will be eager to see what sort of adventure comes next.

At the end of the book, author Margi Preus includes an extensive glossary of Japanese words, terms, and phrases, whaling terms and parts of a ship, and sailor’s lingo.  (And if one of my oppos proves to be a shonkey, I may tell him to stow it before he finds himself with the devil to pay and no pitch hot.)  Heart of a Samurai will be good for upper elementary and middle school students who know the ropes and who won’t be whistling up a wind when trying a more challenging read.
Posted by Brian at 6:33 AM No comments: