While searching for her favorite food, opihi (oh-PEE-hay, a delicious sea snail), in a seaside pool, a young woman named Kalei has a run-in with a rogue wave and what appears to be a shark. An ominous black outline complete with jagged teeth is headed right at her as the wave knocks her off the rocks and into the sea. But instead of gnashing teeth, she is grabbed by two strong hands that pull her to safety. Stunned, she can barely utter a thank you as the rescuer warns her that the Shark King does not like visitors.

Kalei and her mysterious rescuer fall in love, marry, and soon a son is on the way. Shortly before the child is born, the husband goes swimming in the sea for hours When he returns, he announces, “I’m making a place for our son at the bottom of the pool.” At the bottom of the pool? Then, the night before the boy is born, he leaves completely, returning to the sea and revealing himself to be the Shark King.

Kalei is left to raise the boy, Nanaue (nah-NOW-way), on her own. But he is different from the other boys and villagers and must stay hidden. Eventually his secret is discovered when the villagers no longer catch any fish. Blaming Nanaue, the villagers chase him to the only place he can find safety - the pool - leaving Kalei alone.

The Shark King is one of Toon Books more difficult books, Level 3 on their Toon Into Reading scale for “Advanced Beginners.” Pronunciations like the ones in this review are included in the text. Readers will enjoy Nanaue’s antics that keep his mother busy, as any young boy's antics will. Readers will especially enjoy drawing conclusions about the mysterious Shark King and Nanaue. As with all graphic novels, the text is limited, leaving readers to use the images to understand the events. Should Nanaue wander farther and farther from home? Is Kalei truly left alone? Will Nanaue be safe in the pool?

The Shark King by R. Kikuo Johnson is another strong addition to the Toon Books library. But with Toon Books, that’s come to be expected with each new release.
Posted by Brian at 5:42 AM No comments:

Chick and Chickee Play All Day! by Claude Ponti

“Chickie, let’s make masks!” begins Chick in this latest offering from Toon Books. But not just any masks, as young readers quickly find out. Scary masks! Chick and Chickie work diligently - shown expertly in only one panel, heads down, focused on the task - until each uses their grand creation to frighten the other. “BOO!” screams a mask-wearing Chick. “That was me!”

“Oh! That’s funny, Chick!” replies Chickee before returning the favor with a BOO! of her own.

Chick and Chickee move on to playing school with a capital letter A. They discover A’s many talents. A can “Ah!...” when he rests. A can also “AH! HA HA HA HA!” when tickled. When the two friends play catch with A, launching him through the sky, A screams, “Aaaaaaaaaaaa” as he flies. Charge at A with a pin and eraser, and a terrified A hollers, “AH!”

Author Claude Ponti’s ending - “Well, tomorrow we can play with B!” - leaves readers wondering what might happen next and gives grown-ups a great opportunity to discuss exactly that with their young readers.

With Chick and Chickee Play All Day!, Toon Books has added to their small but steadily growing library of graphic novels for younger readers. Toon Books are grouped into Levels 1, 2, and 3, and each book contains easy to understand descriptions of each level inside the back cover including recommended grade levels, lexile, guided reading and reading recovery levels.

But don’t let the educational jargon fool you. These books are not contrived just to fit a category. Toon Books are genuinely fun, kid friendly, and re-re-re-re-readable. There’s something new to discover with every bed time, story time, and reading time, perfect for showing your newest readers the joy books hold.
Posted by Brian at 5:36 AM No comments:

Since this article was originally published in the local newspaper a week ago, people have told me about Erik Estrada, Shaun Cassidy and "Da Doo Ron Ron," and the Jonas Brothers. I suppose when a magazine has been around for nearly fifty years, there are going to be a great variety of generational memories. It's been fun learning about babysitting allowances being saved and walls being covered, and I'd love to hear even more.

Thanks for reading. and please consider sharing your own Tiger Beat memories.

A Tiger Beat magazine recently turned up in my house. Seriously, they’re still making Tiger Beat. I thought it died with parachute pants, eight-inch bangs, and Baby on Board, but it seems I was mistaken - about Tiger Beat, not the parachute pants.

But what drum brought this beat to my house? Magazines don’t just randomly appear on kitchen counters, and I certainly never wrote a check for a subscription.

First, I weeded out the fringe suspects.

Grandma and Grandpa: No flowers, no recipes, no woodworking, and no sports in Tiger Beat. Wasn’t the grandparents.

The two-year-old nephew: No Thomas the Tank Engine pictures. He’s out.

Aunt and uncle: No coupons. No lists of baby names. Nope, not them.

The boy: Despite liking music, a staple of Tiger Beat since Monkees made music, and having a proclivity for posters on his bedroom walls, it doesn’t appear to be the boy. Unless Tiger Beat features photos of Prince Fielder and Justin Verlander - you know, DETROIT Tigers - which it undoubtedly does not, then it wasn’t the boy.

The wife: Drawing on my best memories of the magazine, which are admittedly limited, I felt this issue of Tiger Beat was severely lacking in pictures of Ralph Macchio, Kirk Cameron, and Patrick Swayze. True, the posters could have already been nipped out, but had that been the case, I’d be waking up to Daniel-san, Mike Seaver, and Johnny Castle on my bedroom walls. The wife was no longer a suspect. 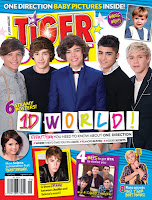 That left the thirteen-year-old daughter as the only logical option.

By process of elimination, the culprit, I believe, had been exposed, and it didn’t take much sleuthing for suspicions to be confirmed. There was music coming from her room, paper trimmings and scissors on the floor, and walls covered with photos of floppy-haired boys.

It’s a classic example of the more things change, the more they stay the same. Regardless of the decade, certain truths remain evident: Whether it’s Monkees or New Kids or One Direction, groups of shaggy-headed boys will make music, and hoards of girls will obsess over them. And cover their walls with the boys’ photos.

It doesn’t matter if these young men are singing about why Sleepy Jean needs to cheer up (Oh, what can it mean?) or explaining how she’s got the right stuff (Oh-oh, oh-oh-oh), or wondering how everyone else in the room can see it (You don’t know-oh-oh, you don’t know you’re beau-ti-ful), the chorus will echo throughout the house ad nauseam. Moms will reminisce about their past obsessions. Dads will cover their ears and complain about the noise.

And everyone can’t help but sing along.
Posted by Brian at 2:04 PM No comments: