Most people know Jeff Smith from his masterful Bone graphic novels, but add him to the list of acclaimed authors for beginning readers. Little Mouse Gets Ready, a 2010 Geisel Honor Book, tells the simple story of Little Mouse getting ready for a trip to the barn with Mama and his siblings. Of course, as it usually is with little ones, telling the story is much easier than the act of getting ready.

“Oh boy, I love going to the barn!” says Little Mouse. “Yes sir! There are LOTS of places to run and hide in the barn!" 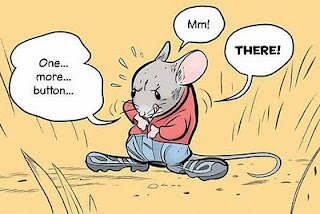 I wonder when a graphic novel will be recognized by the Caldecott committee. I’m not an expert on Caldecott criteria, and someone fill me in if graphic novels would be ineligible, but one item stands out: “Delineation of plot, theme, characters, setting, mood or information through the pictures.” Little Mouse’s response to Mama’s no-clothes declaration is wordless, but it says plenty. 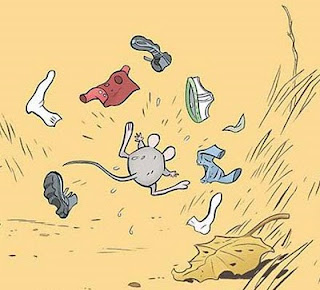 Young readers will successfully read the text of Little Mouse Gets Ready. More importantly, they will enjoy the book repeatedly as more details of the seemingly simple illustrations are discovered upon subsequent readings.

Toon-Books have found a flawless formula and the scientists – er…authors – to masterfully mix the ingredients into beginning reader perfection. The proof lies not only in award recognition, but more so in the enjoyment and laughter of countless young readers. 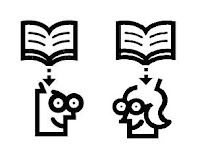 Thanks to everyone from the Waukesha County Reading Council who attended Help Readers Love Reading today. I hope everyone was introduced to a new book or two (or more!) that you can't wait to take back to your students. Hopefully you took away some new ideas about how to use them as well. A special thank you goes to Colleen for inviting me to Waukesha to speak with you today and for taking care of all the planning. Thanks!

If you have any questions you didn't get a chance to ask, additional thoughts or comments, or anything else you'd like to share, leave a comment below this post or send me an email. I'd love to hear from you.

Thanks again for attending this morning's meeting, and thanks to everyone for all you do to Help Readers Love Reading!

UPDATE: Many of you mentioned a desire for more books geared at middle school and high school. All the reviews on the site are organized by grade level. Try here: Grade 6-8 and here: Grade Young Adult. Hopefully you will find more of what you are looking for. I've got plenty of books on the site for those age ranges, but for some reason they didn't make it into the presentation. Thanks for the suggestion.
Posted by Brian at 10:15 AM No comments:

Email ThisBlogThis!Share to TwitterShare to FacebookShare to Pinterest
Labels: Conferences and Presentations

When You Reach Me by Rebecca Stead - I can't argue. The only nit I'd have to pick was mentioned in my initial review. That whole time travel thing is open to debate, I think, and I wonder if the committee discussed whether or not it affected the novel's worthiness. Obviously, they felt it didn't, seeing that it has that shiny medal on the cover.

The Evolution of Calpurnia Tate by Jacqueline Kelly - Another one that gets no argument from me. I thought it moved a bit slow at times, but that's just personal preference. I liked Calpurnia, I liked her grandfather, and I liked how everything turns out in the end.

Where the Mountain Meets the Moon by Grace Lin - Haven't read it.

The Mostly True Adventures of Homer P. Figg by Rodman Philbrick - A rousing "Woo-Hoo!" for this one. As I said in my initial review, how can you not like someone who says, "Telling the truth don't come easy to me, but I will try, even if old Truth ain't nearly as useful as a fib sometimes." Loved the book, love the choice.

More to come as I get the books read, as well as reactions to the Caldecott and Geisel awards. For now I'll simply say the Caldecott didn't stir too much excitement for me, but the Geisel awards? It's time to stand and cheer!
Posted by Brian at 7:28 AM No comments:

Email ThisBlogThis!Share to TwitterShare to FacebookShare to Pinterest
Labels: 2010 Newbery 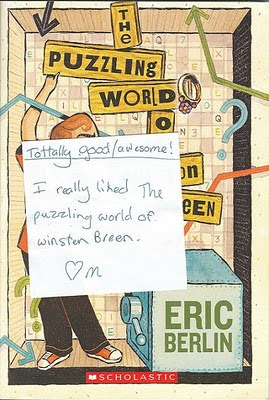 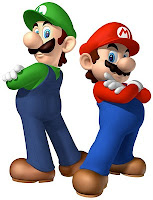 Not quite a year ago I wrote a newspaper column about the iWants and WiiNeeds of my children and the lack of certain items in their lives. My most recent column revisits the topic - sort of - in light of recent events this past Christmas season.

And as I said in the column, I'm washing my hands (and thumbs) of all responsibility, and I'm casting the blame far and wide. Here are the links:

Plenty of blame to go around for Nintendo purchase OR the printable version.
Posted by Brian at 9:44 PM No comments:

Mercy Watson: Something Wonky This Way Comes by Kate DiCamillo 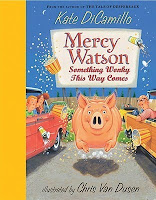 Mercy Watson hits a pig and butter bonanza when Mr. and Mrs. Watson decide to take the family to the Bijou to see When Pigs Fly. Even though Mercy’s favorite food is toast with a great deal of butter on it, the Bijou offers real butter on their buckets of popcorn, and those buckets are bottomless.

Predictably, neighbors Baby and Eugenia Lincoln climb in the backseat, followed closely by neighborhood children Frank and Stella. Some familiar characters are already at the drive-in. Officer Tomilello is in attendance with his wife and former burglar Leroy Ninker is now a reformed thief and cowboy-in-training, gainfully employed selling bottomless buckets of real-buttered popcorn.

With a familiar cast of characters now set, the now familiar chaos that follows Mercy Watson arrives as well. Mr. Watson and Frank leave to get popcorn, but Mercy, the scent of butter in the air, leaves to investigate on her own. Finding a large bucket of popcorn in the hands of a little girl, she helps herself. The young girl’s buttery scream of distress draws the attention of Officer Tomilello, cowboy-in-training Leroy Ninker, and Animal Control Officer Francine Poulet, who is also in attendance. Soon readers’ favorite firefighters, Ned and Lorenzo, are called.

Mercy chases more popcorn. Everyone else chases Mercy. The chaos at the drive-in is absolutely thrilling to Mercy who always has loved a good chase. Finally, as they have in previous Mercy Watson stories, Ned and Lorenzo save the day, and everyone enjoys some hot buttered toast.

Readers can expect to enjoy Something Wonky This Way Comes as much as Kate DiCamillo’s other Mercy Watson books. Probably as much as Mercy enjoys hot toast with a great deal of butter on it.
Posted by Brian at 6:24 AM 2 comments: 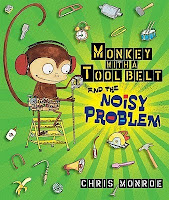 Kids will once again enjoy Chico Bon Bon’s adventure, even though this one doesn’t even take him out of his house. Author Chris Monroe has created a monkey who is thoughtful, thorough, and creative problem solver, and who proves to be a great friend.
Posted by Brian at 7:07 AM No comments: