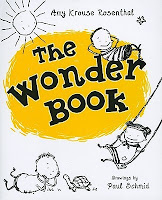 Just past the title page of Amy Krouse Rosenthal’s latest book, readers see “10 9 8 7 6 5 4 3 2 … Wonder Book” and get a glimpse of the creativity in the following pages. The Wonder Book is made up of a healthy dose of poetry, a dash of lists, a pinch of puns, the occasional story, all boldly seasoned with Paul Schmid’s illustrations.

The Wonder Book's humor, childhood wonderings, and simple black and white illustrations are reminiscent of Shel Silverstein’s work, but not in a “Boy-I-Think-I’ve-Read-This-All-Before” sort of way. It’s got more of a “This-Is-Great-New-Stuff-That-Reminds-Me-Why-I-Love-Where-The-Sidewalk-Ends-So-Much” sort of feel to it.

There’s parodies of famous verses, from “Tinkle, Tinkle, In the sea” to “Mary had a little lamp” to the story of five little piggies, my favorite of which “was a toast thief.”
There’s lists of “What you can’t run with” (including sharp pointy things and twin porcupines) and “What you can run with” (which naturally include a bag of marshmallows and a really small baby giraffe).  Adding further clarification, there’s “What grows on trees” (acorns, tree houses, the most important part of apple pie) and “What doesn’t grow on trees” (money, mittens, sausage).
Readers meet "Prince sdrawkcaB", whose poem begins at the bottom of the page with “Once upon a time” and ends at the top with “And to that we say, bye-good, The End.”

Readers also take a trip to “.”  (And being from , I feel it necessary to point out that  is not .  Not in this sense, anyway.)  It’s brat, like spoiled child, not brat, like this guy: 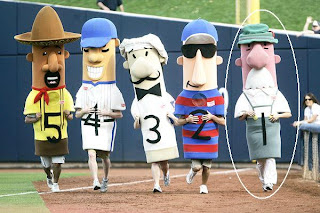 Kids will love poems that feature kid-favorite topics.  “A Rose by Any Other Name” features something referred to as a pedo, fing, onara, and pud.  Regardless of who you are, where you are, or what language you speak, we read, “It’s just really really funny to hear a tushy squeak.”
The Wonder Book closes with “Rhyming Summary of the Universe.”  Sagely bits of advice for readers include:
“Stand up for your sibling or some picked-on first grader.”
“Go jump in a puddle, just bring extra socks.”
“Despite you best efforts, your goldfish may stop swimming.”
“64 crayons you do not really need.  To be happy with three is to be happy indeed.”
Unfortunately, one important bit of advice is not included in the final poem, so as a service, I’ll include it here.
For fun writing for children, you need no further look,
Just head out and get Amy’s The Wonder Book.
Posted by Brian at 7:30 AM No comments:

What follows is a tale of communication and miscommunication, of messages both shared and forgotten, with a touch of childhood ingenuity, a not-really-lost child, panic, and hilarity.  You know, normal parenting stuff.

That's the opening paragraph of my latest column for the local newspaper.  There's a lot squeezed into those 550 words.  Most importantly, and to be abundantly clear, the following two items are absolutely not part of the story.  There are:


Here's the column: 'Forgotten' child leads to late-night tale of woe.  Here's the printable version.  And thanks for visiting Help Readers Love Reading.
Posted by Brian at 7:27 AM No comments: 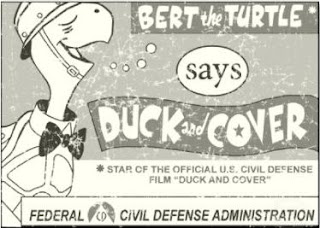 Countdown is billed as a “documentary novel” with nonfiction interspersed within the narrative.  Many of the nonfiction bits relate directly to the story, items like a fallout shelter handbook, news quotes, Bert the Turtle, mushroom clouds, and photos of Fidel Castro, Presidents Kennedy and Truman, and even Nancy Drew.  But some seem present only in an attempt to flesh out the time period.  There are pictures of James Bond, Cassius Clay, Sandy Koufax, and Lucy and Ricky.
I found Countdown fascinating, but I’m hesitant about how the documentary novel idea will translate to younger readers.  If I’m one of today’s 11-year-olds, I’m looking at the picture of Peter, Paul, and Mary with the words “what a wonderful world this would be” and thinking, who’re these guys?  I’d have no clue of the significance of Richard Nixon saying, “You won’t have Nixon to kick around any more” in 1963.  I’d be wondering why there’s a picture of Rocky and Bullwinkle (who?) with a news item about Kennedy and Khrushchev establishing a direct telecommunications line between and .
Actually, I’m wondering about that one as it is.
It’s obvious that Deborah Wiles has put incredible amounts of time into Countdown, the first of three companion novels, and there are plenty of signs of what’s to come.  Many of the nonfiction parts reference the Civil Rights movement, a possible indication of how Franny’s older sister plans to make the world a better place.  I am amazed at the detail, the wide range of cultural references, and the novel’s uniqueness.  I recommend it, hesitantly, believing that grown-up readers of children’s literature will like it more than the children.
Posted by Brian at 6:35 AM 2 comments: 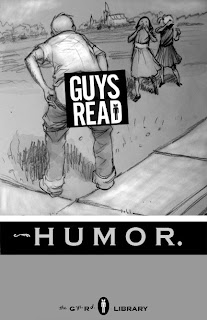 In the introduction to Funny Business, the first genre-specific volume from the Guys Read Library, Jon Scieszka quotes E. B. White.  “Humor can be dissected, as a frog can, but the thing dies in the process.”  So I’m not going to try to explain why this book is funny.  Funny is funny.  Trust me.

Ladies, I’m taking to you here.  It’s from the Guys Read Library.  Guys.  Read.  We don’t expect you to get it.  Yes, some of you will claim you get it, and some of you may indeed, but many of you will simply realize that the boys in your classrooms and homes get it.  And that should be enough.
You’ll nod and smile, but do you really understand the hilarity in a dropped hot dog (Best of Friends by Mac Barnett) or shrinkage (Will by Adam Rex)?  Do any of you actually eat raw hot dogs, let alone make fake nipples out of them (What? You Think You Got It Rough? by Christopher Paul Curtis)?  Ever perform self-surgery on a wart (The Bloody Souvenir by Jack Gantos)?

Do any of you think the black and white alternate cover from Adam Rex is funnier than the final cover?
Well that gives you a taste, anyway, of what’s in the book.  And it’s funny.  Ten short stories from the authors above as well as Eoin Colfer, Jeff Kinney, Kate DiCamillo, David Yoo, David Lubar, and Paul Feig, all meant to tickle a guy’s funny bone, and all successfully jamming that funny bone squarely into arm-numbing merriment.
How about we let the authors themselves give a short introduction?
Posted by Brian at 8:02 PM No comments: