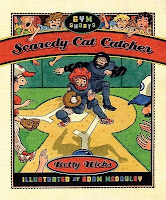 Rocky gets his turn in the spotlight in Scaredy-Cat Catcher, the fourth book in the Gym Shorts series by Betty Hicks. Rocky has always been the best catcher in the league, no question, but on a routine play at the plate, his arm gets broken. End of season.

But that was a year ago. The new season has started, and Rocky is back at his starting position behind the plate. On the first play similar to when the injury happened, Rocky has the guy dead at home. All he has to do is make the tag. But at the last second he pulls his arm away to avoid reinjuring it.

After that disastrous game, Goose, Jazz, Rita, and Henry convince Rocky that it's all in his head. "Bugs on the brain," explains Jazz. They reassure him that it won't happen again. And they're right. The next game Rocky is confident. He won't even flinch! He knows it! When the winning run heads toward home, the ball arrives in Rocky's glove in plenty of time. All he has to do is tag him and the game is over, but . . .

Time for action! Rocky’s friends do all they can to retrain his brain and break his bad habit. They practice in the backyard, Goose sliding toward Rocky as he makes tag after tag. Rocky’s coach gives him words of confidence. Even Chops, Rocky’s skateboard riding bulldog, gets a lesson in.

Rocky has never quit in his life – that’s even how he got his name. His nickname comes from Rocky Balboa, another famous non-quitter. But can he get through this? At times, he doesn’t think he can.

And I have to mention one favorite scene. Rocky is planning to quit, hiding behind “I don’t want to quit. I have to. For the team.” His friends won’t let him. Goose and Rocky make a bet. If Goose can spit in a tulip ten feet away, Rocky plays one more game. What follows is one of the best demonstrations of expectorating in children’s literature, illustrations included. Goose hocks a loogie dead center. Plop!

Once again in the Gym Shorts series, friendship and teamwork win out. Four friends (and a bulldog) come to the aid of the fifth, helping him accomplish a goal he wouldn’t have been able to do on his own. Great sports scenes, great friends, and another great addition to the series.
Posted by Brian at 9:13 PM