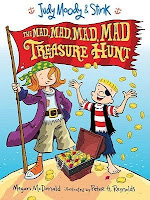 Judy and Stink Moody's last book, The Holly Joliday, featured Christmas vacation. Now they are on vacation again, and it's definitely not winter. The Moodys are on their way to Vegetable Island! Or is it Artichoke Island? Judy knows. "You mean Ocracoke Island."

Stink doesn't care. "I just want to meet pirates and look at shipwrecks and see real gold and find treasure." When the ferry docks, Scurvy Stink and Mad Molly O'Maggot meet a real life pirate who informs them that Third Annual Pirate Island Treasure Hunt starts first thing in the morning. X marks the spot on their map. Unfortunately, X only marks the start of their hunt, not their desired destination.

Working their way around the island, Judy and Stink must solve clues to collect sixteen pieces o’ eight. The clues include rhymes, puzzles, codes, talking birds, and hidden signs. Judy and Stink also need to watch out for spies in the form of another brother and sister team they nickname Tall Boy and Smart Girl.

(There’s also a trip to the Crab’s Claw, a seafood restaurant on Ocean View Road, which incidentally, would have been my downfall. “Maybe the next clue is inside this crab cake!” [Chomp] “Nope.”)

The best part of the book is the interaction between Judy and Stink. Despite their light-hearted teasing and sibling name-calling, they really do work together. It’s pretty obvious that neither of them could succeed on their own, but together, they just might have a chance.

In the end the Moody’s hunt leads to more than treasure. They learn the truth about their closest competition and the value of teamwork and good friends.

Look for this latest Judy and Stink Moody adventure from Megan McDonald in August.
Posted by Brian at 10:36 PM