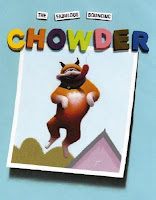 Chowder is back, in all his drooly, slobbery greatness. He's dying to attend Twisty's Acrobatic Fanatic Camp, but Twisty doesn't allow it. No dogs. Instead Chowder is on his way to the Fabu Pooch Boot Camp, where beautiful dogs are turned into fabulous dogs.

Dog shows, dog salons, canine chiropractors, hair perms, and ... Chowder? As usual, he doesn’t quite fit in. While his fellow canine campers are primping for the First Annual Fabu Pooch Pageant, Chowder wonders how he can win the one-year supply of Snarf Snacks.

But do trampolines belong in a Pooch Pageant? Will his newfound greatness be enough to earn The Fabulous Bouncing Chowder the one-year supply of Snarf Snacks? That’s up to the judges. If it was up to readers (and Chowder’s barnyard kickball friends from his first book) however, he’d have more Snarf Snacks than one drooling doggy could snarf.