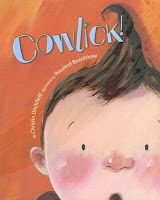 Raise your hand if you know a boy / have a boy / taught a boy / ARE a boy that has a cowlick. There’s probably one in your family. If you’re in a classroom, glance up. There’s two more. (see below)

Sometimes it’s simply bad bed head, nothing that a little water and some extra comb time can’t cure. But other times the cowlick is more…pronounced. Permanent. You can water it, dry it, rub it, comb it, brush it, or cut it, but to no avail.

All because some cow decided to lick it.

So what’s up with the whole cow thing? Christin Ditchfield explains all in Cowlick! With bold illustrations and simple verse, readers learn about a slurping, nocturnal bovine spreading what is apparently nature’s best hair gel one lick at a time.

Special Note for Wisconsin Readers: If you, like me, live in the great state of Wisconsin, here are some statistics that – while they may not frighten you – should cause you some concern. According to the Wisconsin Agricultural Statistics Service (WASS), August 2008, there are 1,252,000 dairy cows in Wisconsin. According to the U.S. Census Bureau’s 2006 estimates, there are 1,311,335 Wisconsin residents under the age of eighteen. That’s nearly a 1:1 ratio of cows to kids. Sluuurrpp!

Our state has a lot going for it. Unfortunately, good hair isn’t on the list…if we believe the theory set forth in Cowlick!

Check out this matching pair from my classroom! Impressive.
Posted by Brian at 9:16 AM