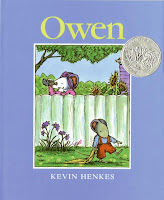 Owen by Kevin Henkes is for everyone who has their own Fuzzy. Owen's is a yellow blanket that, despite becoming not-so-Fuzzy over time, still remains his Fuzzy. A person's Fuzzy can take many forms, although soft and ideal for nighttime snuggling seems the status quo. Mine was Oscar the Grouch. Oscar got his tonsils out the same time I did and needed to have his pupils repainted after the originals wore off. Owen had Fuzzy.

Fuzzy's been on many travels. Inside, outside, upstairs, downstairs. Kitchen, backyard, bathroom, bathtub. Fuzzy enjoys the same drinks (orange juice, grape juice, and chocolate milk) and snacks (ice cream, peanut butter, and applesauce cake) as Owen and has the stains to prove it. Fuzzy goes where Owen goes. Barber, dentist...school?

Owen is getting older, and school is coming. Blankets are not allowed at school.

Mrs. Tweezers, the over-the-fence backyard neighbor, has all sorts of suggestions. The Blanket Fairy. The vinegar trick. Saying no. Of course, anyone who's had their own version of Fuzzy knows tricks do not work. Solutions work. And Owen's mom comes up with the Fuzziest of solutions. Owen keeps Fuzzy, Fuzzy accompanies Owen to school, and Mrs. Tweezers doesn't have even one critical word about it.
Posted by Brian at 4:52 PM