First and foremost, let’s get this straight. Hacking does not mean strictly computers. Sure, computers might be involved, but this isn’t a use-my-computer-to-get-inside-your-computer story. Let Max explain: “Hacks. Not pranks. Never pranks. Pranks are for amateurs. But a hack…you’re playing in a different league. Higher profile. Higher stakes. Higher calling. Worthy targets, long-term planning, technically sophisticated and precise execution – and a noble purpose. You want to make a statement, stand up for the right side. You want to take someone down who really deserves it.”

So. Hacking Harvard. And everyone has a good reason.

Eric: His father, a Harvard economics professor, feels engineering is nothing but playtoys. Child prodigies like Eric, kids who doodle supply and demand curves in their coloring books in the back of lecture halls, should – must – pursue a real education.

Max: His father will fund Harvard, but nothing else. Harvard. Night classes at BU? Are you kidding? Work for a startup computer firm? What about the five Harvard diplomas already displayed on the family’s wall? What will fill Max’s spot?

Schwartz: He’s already in Harvard. On the inside. Sixteen years old. Logical thinker, mathematics genius. His reason? He’s with Max and Eric. They hack together.

Clay: Slacker. Smoker. Not too high on education. His reason? Six hundred bucks.

Harvard is “the man.” Proverbially so. As in the one to whom you “stick it.” The hack is to get someone (Clay Porter) admitted to the freshman class. He doesn’t deserve it. Not even close. Clay Porter at Harvard?

It’s the ultimate hack, and since Max has made a bet with the Bongo Bums, it also has the potential to be financially fulfilling. So the plan starts. Hidden cameras, spying missions, and dossiers of admission facts categorized by various statistical breakdowns. Acing the SAT, the application, and the interview. Creating an entirely new persona for Clay that the Harvard admission office will be unable to reject.

The plan is perfect. But no plan ever goes off without a hitch. A romance featuring Lex, who’s actually the story’s narrator, the acquisition of funds from an untrusted fifth partner, sabotage attempts from the Bums, and even a double cross or two. All force the perfect plan to become Plan B, Plan C, Plan C1, Plan C1.1, Plan D beta…you get the picture. Much of the excitement comes when something doesn’t go according to the plan and Eric, Max, and Schwarz – and even Clay – must improvise.

Hacking Harvard, written by Harvard grad Robin Wasserman, is getting my highest recommendation. Having been “on the inside,” she offers insight into Harvard and the Harvard mentality that add greatly to the story’s realism. I would keep this young adult book to the young adults, not just because of the language and some situations, but readers below high school won’t appreciate the beliefs and attitudes surrounding college admission. Most will lack the prior knowledge necessary to truly appreciate it.

Below you can see the statue of John Harvard, Memorial Hall, and Memorial Church, all on the Harvard campus. 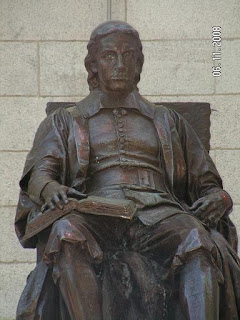 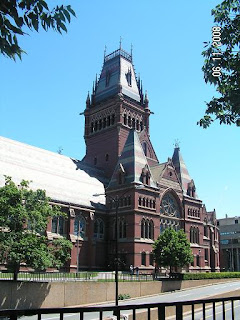 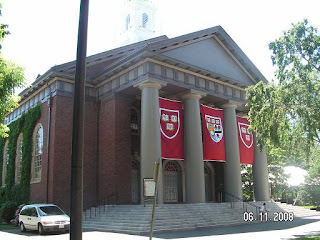