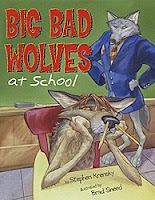 So how do wolves learn all that stuff about being big and bad? What about the huffing and puffing and dressing in grandmother’s clothes? Why, they go to the toughest school around, the Big Bad Wolf Academy.

When the headmaster discusses the changes that will happen to new students - how they will become some of the biggest and baddest wolves around - most students are impressed. But not Rufus. (He’s noticing a butterfly.)

Some of the students do wonderfully on the Huff-n-Puff Range, taking target practice three little piggy houses. But not Rufus. (He’s poofing a dandelion.)

The students learn costumes and foreign languages (“Baaaaaa!”) and how to properly wear sheep’s clothing. But not Rufus. Sitting in class is for daydreaming and letting pencils dangle out your nose. There’s better things to do when studying should be done!

But then the hunters come.

Costumes? Huffing and puffing? All that education is great, but sometimes you need the lessons learned from life, learned in the forest, that practical knowledge that sometimes gets pushed out by book knowledge.