Bomb: The Race to Build - and Steal - the World's Most Dangerous Weapon by Steve Sheinkin 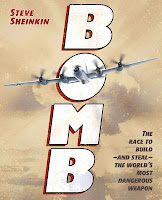 I just finished Bomb by Steve Sheinkin. It is about the development of the atomic bomb during World War II. There are four parts to the story. Part 1: Three-Way Race, Part 2: Chain Reactions, Part 3: How to Build an Atomic Bomb, and Part 4: Final Assembly.

The Three-Way Race introduced in Part 1 is about who would be able to build the first atomic bomb. The United States, working with the British, were fighting against the Nazis from Germany. The USSR was fighting against the Germans too, but even though the Soviets and the Americans were both fighting the Germans, the two countries weren't friends. That’s who was involved in the three-way race: the United States (with the British), the Germans, and the Soviets.

The United States hired the best scientists in the country to develop the bomb. The Germans were doing the same thing with their country’s best scientists. The Soviets wanted to develop a bomb, but most of their resources were spent fighting the Germans. Instead of trying to create their own bomb, the Soviets tried to steal information from the Americans.

While the Americans were working to develop their own bomb, the British were helping by trying to stop the Germans. The British had spies in countries that Germany occupied. They discovered that a major factory working on materials for the bomb was in Norway. Working with Norwegian underground fighters, they successfully destroyed the factory by sneaking in at night. They pulled off the mission, and none of the Norwegians were ever caught. The factory was soon put back into operation. Later, many of the same people successfully sank a boat transporting materials for the Germans. Even though the first attack was temporary, in the end the British and Norwegians basically stopped the Germans from creating their own bomb.

The Soviets were the Americans’ allies in the war, but they also were spying on the Americans. Soviet scientists were eventually able to build a bomb of their own but only by using information stolen by spies in the United States. They had spies who talked to American scientists and sometimes convinced them to help the Soviets. The Soviets were communists, which is another form of government, and they convinced some Americans that even if they were able to develop their own bomb, it would be important for another country, the USSR, to have the bomb too, to keep the Americans from becoming too powerful. Even loyal Americans sometimes agreed with the Soviets’ ideas about communism, which encouraged them to share American secrets.

Sincerely,
Brian Sixth Grader
Posted by Brian at 5:19 AM