Two Boys at the Bat 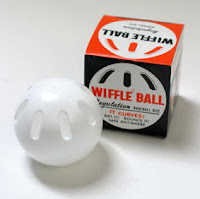 The outlook wasn’t brilliant for the Vesper Two that day.
The score stood eight to one, with but one inning left to play.
The old man’s pitches jumped and dove and drifted through the zone
And left the boys no chance to get the tying runs to home.

Still, eight-year-olds are vessels where hope quickly comes to nest
And hope can grow to certainty within the human breast.
“It’s Wiffle Ball,” they said and thought, “There’s no doubt we can score.”
The mound, though, held their elder who was set to slam the door.

His fast ball was a pitch no normal eight-year-old could see,
His breaking ball broke right or left, two feet, yea, even three.
Two boys came up, two boys went down, two boys without one hit.
But when one out remains, the door lies open just a bit.

For then the crack of plastic ball upon a plastic bat
Propelled the sphere a-hurlin’ past the maple, meaning that
The old man’s Son had smacked a timely, rally starting double.
That well-timed two-base hit foretold the man’s impending trouble.

Then Neighbor Boy let rip a shot that severed off some leaves,
A frozen rope unhindered by the stiffly blowing breeze.
An added single punched to left by handsome, eldest Son
Resounded off the porch and cut their deficit by one.

The man then muffed a pop-up. Yes!  A gaffe he could not fix
Nor could he blame it solely on the Wiffle’s aerobatics.
Imaginary runners filled imaginary bases.
A blind man could have seen the joy displayed on both boys’ faces.

The old man, once so self-assured, now was clearly shaken
Due to chances lost and opportunities not taken.
“Momentum must be changed to get my one-man-team on track!”
His Son was up.  What did he do?  He plunked him in the back.

The Neighbor Boy cried, “Charge the mound!” His fists displayed his form.
His words were meant to trigger the potential building storm.
But tranquil tempers held; the Son refused to take the bait,
With courage, grit, and fortitude, he squared up to the plate.

“This kid is tough,” the old man thought, “I’m proud to be his dad,
“When they go down to grim defeat, I may feel slightly sad.”
His sympathetic ramblings, though, evaporated when
His son, a backyard legend born, let loose a hit again.

Then Neighbor Boy, that rotten kid, (this once I must opine)
Stepped up to bat and promptly sent a screamer down the line
That added one more run, another came without delay
When Son’s base hit allowed the boys to live another day.

The stage was set for Neighbor Boy to end this backyard contest,
And hit a shot that would cap off this epic comeback conquest.
A fastball came, and most would think ‘twas from a cannon shot.
The Neighbor Boy was many things, but Casey he was not.

The shot rang out and echoed through the neighborhood that day,
A blast to let all comers know these boys were here to stay.
That Wiffle Ball sailed ‘cross the yard, majestically divine,
Until it came to rest beyond the distant, planted pine.

The comeback one boy did begin, ‘twas finished by the other!
“One more at bat is all I need.  I wish I had another.”
His chance would come, he knew, as if told by some distant drummer
Of multiple rematches stretched throughout the rest of summer.

I had much more fun writing this than experiencing the events it documents.  Ah, who am I kidding?  I'd lose in walk-off fashion to my eight-year-old and the rest of the neighborhood kids every day if given the chance.

UPDATE:  Two Boys at the Bat was included in the August EXCURSIONS Journey To Health Wiffle Ball Newsletter.  To go along with the newsletter, I posted a photo tour of The Flower Garden, our backyard Wiffle Ball field where the story took place, as well as a reader challenge on Help Readers Too.
Posted by Brian at 8:16 AM