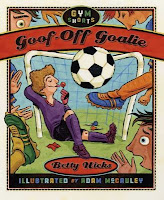 Here’s the best part of the Gym Shorts series. Goose, Henry, Rita, Rocky, and Jazz are true friends. They do whatever they can, whenever they can, for one another. Despite the difficulty of Goose’s choice, the correct choice is made. In the end readers will enjoy the fast-paced game action featuring Goose’s – and Henry’s – big day.
Posted by Brian at 9:25 PM