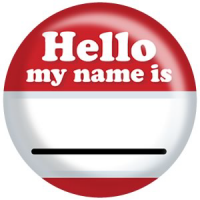 There are approximately 4 million children born each year in the United States. That means there are around 8 million two- and three-year-olds. Eight million kids learning to speak ... with varying results. My own kids are no exception. With all these little ones toddling around, trying to successfully speak what they've been hearing their whole lives, I know there must be other kids with names like Beef and Maymay and Bubba and Teetee.

And I'd love to hear about them. See more at the bottom of my latest column. (You can see the original here until it is archived.)

I have a son named Beef.

No, this is not the name on his birth certificate, Beef not being what our grandparents might call "a strong, Christian name." Beef is not a traditional family name, nor is it a tribute to a close friend, favorite literary character or dinner selection.

It's all because of his sister, Maymay, who, needless to say, has her own name issues.

Once, when I was changing Ethan's diaper, Megan, then 3, tried talking to him using his first name. "Eefy," she said, with concerted effort.

Now, the boy was in that 9 to 12 month range, when eating has been mastered but moving is still a challenge, so he wasn't yet burning off the calories he was taking in. Both legs had rolls at his ankles, mid-calf, knee, mid-thigh and hip.

A nickname was born. Sure, I might have added the B, but the girl's "Eefy" was the inspiration. Ten years later and the boy is writing Beef on his school papers and talks about going to court to make it legal. His own mother calls him Eef. He's the Beefer, Beefy, Beef, Eef, and, occasionally, Eefy-Beefy.

Three years later, the Beefer returned the favor. Megan was one syllable too many. "May!" he'd yell.

It was a process. We worked at it. He created variations -- May, Maymay, Maynuh, Maynuhmay -- but in the end Megan turned out to be a name he could handle. Today she prefers Meg, but there's still ample family evidence of her nickname's history.

Last weekend we went to Bubba's house. Bubba, or Caleb more accurately, was known as Cabub for a while, thanks to the Beefer's linguistically challenged fourth year of life. Naturally, Cabub evolved into Bubba.

Bubba and Beefy: Two skinny kids who have names that sound like the hosts of "Deep Fried Favorites" on the Food Network.

Eef and May have a 2-year-old cousin. Alex is still contemplating Meg's name, but he's got Ethan's. His version, anyway. "Eeeeeeee!" Alex says when he sees him. He can even communicate full sentences using only Ethan's name. "E?" translates to "Have you seen Ethan? I have come to his house and am eager to play that game where we run recklessly throughout the living quarters."

My wife was, at one point, nicknamed Gaga by her younger sister. How Jennifer became Gaga is a mystery, but it did lead to a quote still oft repeated by her family during card games. "Puck 'em, Gaga! Puck 'em!" (Yeah, the whole family is thankful that nickname didn't stick.)

Let's face facts: Grown-ups aren't very creative. Our best nicknaming seems to revolve around the letter Y -- either adding one or cutting one. Is this the best we can do? Call the guy named Smith, Smitty? Change Murphy to Murph?

Kids create the best nicknames when they try pronouncing real names correctly. So now I want to know your family's best kid-created nicknames. Email me your stories at KidNicknames@gmail.com, and if the feedback is good, I'll write a follow-up article.