Spaceheadz Book One by Jon Scieszka

When you’re the new kid in fifth grade, the last thing you want is to draw any negative sort of attention on the first day of school. So when new kid Michael K. is befriended by Spaceheadz from another planet masquerading as fifth graders on day one, his prospects ain’t good. Now consider that Bob and Jennifer, two of the disguised Spaceheadz, have learned everything they know about Earth from monitoring our TV and radio waves – and behave accordingly – and you start to recognize the direness of Michael K.’s situation.

And one more thing: The third Spaceheadz is the class hamster, Major Fluffy.

Yeah, Micheal K.’s fifth grade year is off to a memorable (forgettable?) start.

Eventually Michael K. learns that SPHDZ, despite their odd appearance and propensity to quote American TV commercials, are actually on a mission to save Earth. They may be somewhat misguided, but they are well intentioned. Part of their plan is to give Charmin to Earth persons to make them happy and want to be SPHDZ. After all, “It is ultrastrong. And it also makes bears very happy.” It’s the sort of logic you’d expect from beings who’ve learned all they know about Earth from our TV and advertisements.

“It doesn’t have anything to do with bears,” explains Michael K. “It’s toilet paper, you know?”

Ultimately, their plan involves recruiting 3.14 million and one Earth persons to create one gigantic SPHDZ Brain Wave or Earth gets turned off. Click.

Working against SPHDZ, and all alien activity, is Agent Umber and the Anti-Alien Agency. Constantly on the lookout for aliens, Agent Umber is alerted to a possible AEW (Alien Energy Wave) in his sector at coordinates D-7, which just happens to be room 501B, Brooklyn P.S. 858. Mrs. Halley’s fifth grade. Agent Umber sees his opportunity to catch a real alien, earn a promotion, and save the Earth.

I tell you about this book not because I recommend it, although I do. I do so because it is my pledged duty to BE A SPHDZ, and odd things happen when you are SPHDZ. I have promised to grow the SPHDZ network and to add my brainwaves to the 3.14 million SPHDZ G Group Brainwave needed to save the planet Earth.  I share this book with you because: 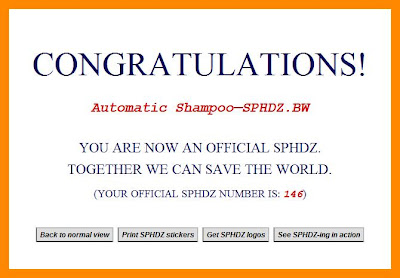 Do the same. Read Jon Scieszka's Spaceheadz Book One. BE SPHDZ.
Posted by Brian at 4:12 PM