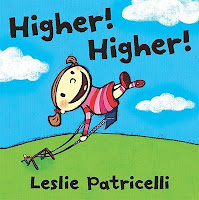 If a book immediately connects to the kid reading it, or to the adult reading it to the kid, or the kid to whom the adult is reading, or to the sibling on the other side of the room while the book is being read to a younger sibling, or the grandparent who … well, you get the picture. If the book makes a connection, chances are it’s going to be a winner.

For us it happened when Little Pea hollered, “Again! Again!"

It happened when the boy realized, “Papa’s got a Stormy Kromer!” when reading Stormy’s Hat.

It happened with Make Way for Ducklings when we actually met the ducklings.

And it happened again with Leslie Patricelli's Higher! Higher!. What child doesn’t scream, “Higher! Higher!” when being pushed on the swings? Ours sure did.

I remember shouting the exact same thing when I was but a wee-one, but my imagination is apparently much Lower! Lower! than the young lady’s in the book. I always thought a loop-the-loop around the swing set bar would be cool. But to swing as high as a giraffe? To the tops of buildings? To mountain peaks? Past airplanes and the atmosphere? That’s some serious swinging!

Swinging of this magnitude is, according to the text, not exclusive to Earth. If there is life on other planets, then it stands to reason that extra-terrestrial toddlers would also love swinging higher and higher. And if two simultaneous swingers were to meet at their highest point, what would they do?

After swinging like that, or after reading a book like Higher! Higher!, there’s only one thing a kid can say. “Again!” 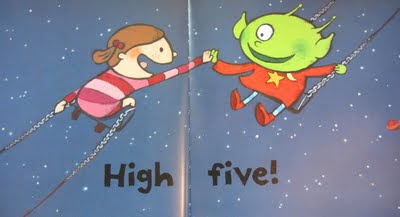