Lincoln and His Boys by Rosemary Wells 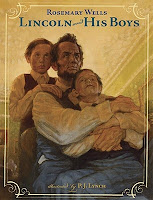 I don't think Lincoln and His Boys offers too much new or relatively unknown information about Abraham Lincoln, but it does offer a perspective I haven't seen before. Readers meet President Lincoln through the eyes of his youngest sons, Willie and Tad. The book is divided into three sections: Willie 1859, Willie and Tad 1861, and Tad 1862-1865.

Willie, the older of the two brothers, relates the events leading up to his father's election. There's not a lot of historical facts - it's not a history book disguised as a children's book. Yes, it's the events before the election, but not debates and politics. It's a trip to the tailor and a special trip to Chicago with his father. It's keeping a promise to mother to go see Miss Jenny Lind, the best lady singer in the world, for Willie's edification. But it's also about a father who makes time to take his son to see the Chinese acrobats and jugglers at Metropolitan Hall.

The second section is again narrated by Willie, but tells of the family's travels to Washington on the train after Lincoln is elected and the events of their first year in Washington. The kids build a fort on the White House roof, complete with log artillery, mostly pointed south. The boys bust into Cabinet meetings and are the only cause of laughter for the president.

Tad picks up the narration after the fever that struck both he and Willie leaves his brother dead. His part continues to the end of the war, closing with the two most powerful events - a trip to Richmond immediately after the war's end and the president's command that the army band play Dixie in Washington.

Take time to look at the pictures. Study them. Look at the joy on Lincoln's face when he is with his boys. Notice the glares on the faces of Lincoln's Cabinet members at the same time. P. J. Lynch's illustrations deserve recognition in any review of Rosemary Wells' wonderful book.
Posted by Brian at 8:47 PM