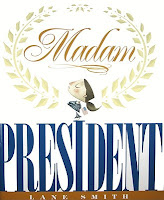 “A president has many duties,” begins Madam President. What follows is a day in the life of the president, illustrated through the life of a typical elementary school girl.

From giving executive orders to attending state funerals, this young president is just as busy as the actual president. Just because her executive order has to do with waffles and the state funeral is for Froggy, doesn’t mean she’s not busy. Do you think negotiating a peace treaty between Cat and Dog is easy?

Madam President has dark shaded secret service agents and press conferences and disasters to tackle and the wonderfully wonderful power to veto. Tuna casserole for lunch? “Veto!” Little House on the Prairie the Musical? “Veto!” (This kid’s earning my vote.)

At first I wondered if Lane Smith’s book would be an anything-boys-can-do-girls-can-do-better kind of book. It’s not. Not in the least. Madam President simply explains the responsibilities of the president through the eyes of a kid. And the kid happens to be a girl. The boys in my class as well as the girls craned their necks to find the secret service agent in the illustrations and to check out the Secretary of the Interior.

And every one of them knew exactly what it’s like to deal with a not-so-secret communication declaring their room a disaster area.
Posted by Brian at 8:09 AM