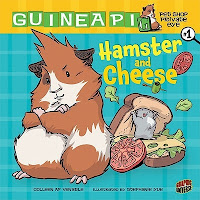 Guinea Pig, Pet Shop Private Eye is a new graphic novel series that focuses on events in Mr. Venezi’s Pets & Stuff.  Mr. Venezi might run a great pet shop, but young readers will laugh at how he mixes up his animals.  Right in the beginning of book #1 there are mice and a turtle in a cage labeled “Walruses” and there’s a goldfish in a rabbit’s water bottle in a cage labeled “Three-Toed Sloth."
In the first book, Hamster and Cheese, someone is stealing Mr. Venezi’s sandwich.  Now stick with me here - the hamsters, who think they are koalas, are worried because Mr. Venezi thinks they are stealing his lunch.  If it happens again, he’s getting rid of all the koalas.  So, logically enough, the hamsters are worried.  Now Hamisher the Koala … err, Hamisher the Hamster wants to hire Sasspants the Guinea Pig to solve the mystery.
Why Sasspants?  The G from her correctly labeled cage has mysteriously disappeared, leaving Guinea PI, as in Private Investigator.
The mystery unfolds with numerous suspects, a nearly purchased chinchilla, and some not-so-trustworthy goldfish eye witnesses.
In the second book of the series, And Then There Were Gnomes, a ghost is suspected in the pet shop, and both Hamisher and Mr. Venezi have their evidence.  When the mice start disappearing, there really is a mystery, ghost or no ghost, and Sasspants, Pet Shop PI is on the case.
Guinea Pig, Pet Shop Private Eye is a great new graphic novel series for readers ready to try out graphic novels for the first time and readers who have enjoyed books like Otto’s Orange Day and Mo and Jo: Fighting Together Forever from Toon Books.  Hamster and Cheese, And Then There Were Gnomes, and the third book, The Ferret’s a Foot, will move quickly off the shelves of school and primary grade classroom libraries.
Posted by Brian at 4:27 PM