Here There Be Monsters by HP Newquist 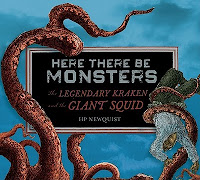 Before we begin, two quick thoughts:
1. At first glance, the cover of Here There Be Monsters led me to believe this was one of those fantastical nonfiction books that tell magical travelers how to avoid dragons, trolls, and ogres, complete with ornate maps and directions written in rhyming couplets.  It’s not.
2. Here There Be Monsters is just regular ole’ nonfiction, and generally, I dislike nonfiction.  That being said, I have been known - only on occasion, mind you - to read and enjoy regular ole’ nonfiction.  This is one of those occasions.
The full title is Here There Be Monsters: The Legendary Kraken and the Giant Squid.  The prologue begins by asking the reader, a school-aged youngster, to imagine being the late-night lookout on a ship.  You are suddenly drawn out of your drowsiness by a violent thump against the ship.  Then another.  You investigate and discover a giant eye peering at you from the depths, then arms and tentacles covered with suckers and claws groping the ship’s deck.  Eventually you and the crew fight off the monster and save the ship.
When you return to land, your story is dismissed as fantasy.  No one believes you.
Author HP Newquist goes on to explain that these legends, while many times exaggerated in the telling, were indeed based on the truth.  He details the names of scientists, their discoveries, and how each bit of information they learned invariably led to more questions.  One chapter outlines the events of 1870-1880, when there were dozens of sightings and numerous specimens that washed up on the world’s beaches.  Later he details similar events ninety years later during the 1960s.
Newquist does a great job of only giving readers the information scientists discovered as he recounts historical events.  It’s history on fast forward.  Instead of 500 years of scientific discoveries, readers get all 500 years in one book.  There’s anticipation as to what the next discovery will be without the decades of waiting.
As readers learn more about the giant and colossal squids (yes, they are two distinct animals), they are also presented with the fictional accounts that helped grow the legend of the kraken, novels like Moby Dick, Twenty Thousand Leagues Under the Sea, and Peter Benchley’s Beast as well as movies like Disney’s adaptations of 20,000 Leagues and Pirates of the Caribbean.
All of this - the history, scientists, specimens, legends, and stories - are integrated nicely for an informational yet enjoyable read.  Rather than reading to learn more, I found myself reading to find out what the next discovery would be.  Would the mystery of the kraken / giant squid be solved?  Turns out it’s a mystery still being solved today.
Posted by Brian at 5:52 AM