Zig and Wikki by Nadja Spiegelman and Trade Loeffler

I've become a big fan of TOON BOOKS since running into Otto's Orange Day nearly two years ago. According to their books and website, they are "bringing new readers to the pleasure of comics." They're also bringing old readers (like me) the new pleasure of comics.

Zig and Wikki are entertaining characters that will make young readers laugh and the book's bright and colorful illustrations fit the traditional TOON BOOKS' mold. The pacing fits young readers and plot elements - video games, forgotten homework, lost in space - are just the thing to get young readers' attention.

But Zig and Wikki in Something Ate My Homework gives a unique spin to comics that TOON BOOKS hasn't yet shown. In addition to an enjoyable story, author Nadja Spiegelman and illustrator Trade Loeffler weave photographs and science facts into their story, courtesy of Wikki's head (more about his head later). So what's that give us?

Zig is a one-eyed, orange, tentacled young space creature who needs to complete his homework - find a pet to add to the class zoo. Wikki is walking 1950's flat screen, if such a thing existed, who tends to act before thinking out his actions. When they stumble upon Earth after Wikki gets them lost, they figure the swamp they discover would be a great place to find a class pet. A fly? A dragonfly? A frog? All would make great additions to the class zoo. If they could only catch them.

Each time they discover something new, the screen in the middle of Wikki's head turns on, offering photographs and descriptions of their new discovery, many times disgustingly awesome to young readers. Did you know flies spit on their food and then suck it back up again? Neither did Zig and Wikki until Wikki's screen told them.

I Bring Up This Topic... 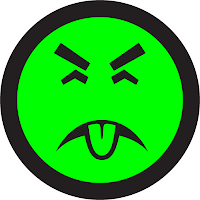 My latest column for the local newspaper tests the theory that all parents share certain, specific experiences, regardless of when or where they were parents. Today's topic?

And I'd love to extend that theory beyond the informal questioning conducted at a recent school gathering. (Those little nuggets make up the bulk of the article.) So I hereby open up the floor to ... well, everyone. Anyone got a good story to toss out there? After reading the column, consider sharing your experiences. I'd love to hear them. Leave a comment here or over at the Daily Tribune. Thanks.

Finally, I couldn't resist this little excerpt from Jon Scieszka's Knucklehead. "Stick with your brothers. Stick up for your brothers. And if you ever drop a pecan nut log in a car with your five brothers and the cat . . . you will probably stick to your brothers."

Thanks for visiting Help Readers Love Reading!
Posted by Brian at 7:17 AM No comments:

Pearl and Wagner: One Funny Day by Kate McMullan

No matter what day it is, waking up late because you don’t hear your alarm clock is a lousy way for a day to begin. When that day is April Fools’ Day, however, as happens to Wagner in One Funny Day, he is immediately thrown off guard. So when good friend Pearl informs Wagner that their teacher, Ms. Star, is roller-skating around the classroom, he says, “She is?” Everyone starts laughing, and Pearl informs him, “Today is April Fools’ Day. And I fooled you.”

Wagner panics when Ms. Star tells the class to turn in their homework. He freaks when the librarian, Mr. Fox, notifies him his library book is overdue and he must pay a fine. He loses his appetite when the lunch menu lists fisheye stew, french fried flies, applecore pie, and bug juice.

“April Fools!” everyone cries – even the responsible adults!

After a gym class of dancing and a glass of real bug juice from his froggy friend, Henry, Wagner is definitely having a day, but it’s not a funny day as the title implies.

Readers will be thinking, “Poor Wagner!” when he suddenly becomes ill in chapter three. What’s worse than being sent to the school nurse during silent reading time?!? When he returns to class covered in green spots, he announces his diagnosis from the school nurse: bug pox, and a bad case of it at that. It’s only contagious if he … ah-ah-ah-CHOO! … sneezes.

For as bad as Wagner’s day begins, he ends the day laughing harder than anyone else, and no, uncontrolled delirium is not a symptom of bug pox.

I was not familiar with the Pearl and Wagner series until Kate McMullan was awarded a 2010 Geisel Honor. After reading One Funny Day, beginning readers (and you) will be looking for Two Good Friends and Three Secrets and more adventures from these two good friends.
Posted by Brian at 6:49 AM No comments:

Tedd Arnold adds to his excellent Fly Guy series with I Spy Fly Guy!, winner of a 2010 Geisel Honor for beginning readers. This time Buzz and his gifted pet, Fly Guy, a pet who can say his owner’s name, are back for a game of hide-and-seek.

Buzz is it first. Fly Guy hides in the garbage can. That’s where he always hides. After all, he enjoys a delicious snack while he waits for Buzz to find him. Later, when Buzz shuts himself in the garden shed, Fly Guy finds a way inside. “BUZZ!” he calls.

When Buzz is it a second time, Fly Guy heads to the garbage can. Before Buzz can find him, the garbage man comes! He empties the can into the back of the truck and takes the garbage – and Fly Guy – to the town dump. Buzz catches his dad before he leaves for work, and they race to follow the garbage man.

“Fly Guy, where are you? Fly Guy, answer me!” calls Buzz in the town dump. A zillion flies all answer at the same time.

How will Buzz find Fly Guy when there are a zillion flies, and all of them are able to say his name? Twice he thinks he finds Fly Guy, but instead of getting back his pet, Buzz gets boinked on the nose and bit on the hand! Only when Buzz remembers that the game of hide-and-seek is still going does he come up with a solution to finding Fly Guy.

Beginning readers will love I Spy Fly Guy! and all the books in the Fly Guy series. Familiar characters, simple text, and satisfying stories are found in them all, and Tedd Arnold’s second Geisel Honor is well deserved.

I wish I had a pet who could say my name.
Posted by Brian at 6:31 AM No comments: