You Are (Not) Small by Anna Kang and Christopher Weyant 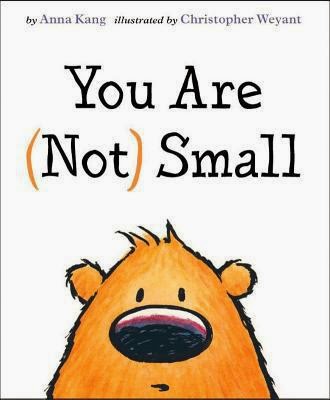 So there’s this fuzzy purple guy and he’s just standing there. And then this taller fuzzy orange guy comes and he’s all like pointing at the purple guy and he says, “You are small.” He even has this pointy-down mean eyebrow look on his face.

Well then the fuzzy purple guy, he denies it. He says, “I am not small.” Then he totally turns it around on that orange guy and says, “You are big.”

Well then of course the fuzzy orange guy, well, HE denies it with an “I am not big.” Then he gets this smug look on his face like he knows something the purple guy doesn’t know, and he says, “See?” and points behind him. And there’s like four more fuzzy orange guys and they’re just as tall as him!

Hoo boy, that purple guy gets all grumpy but now he’s got like fourteen fuzzy purple guys with him all of a sudden and they’re the same size as he is! 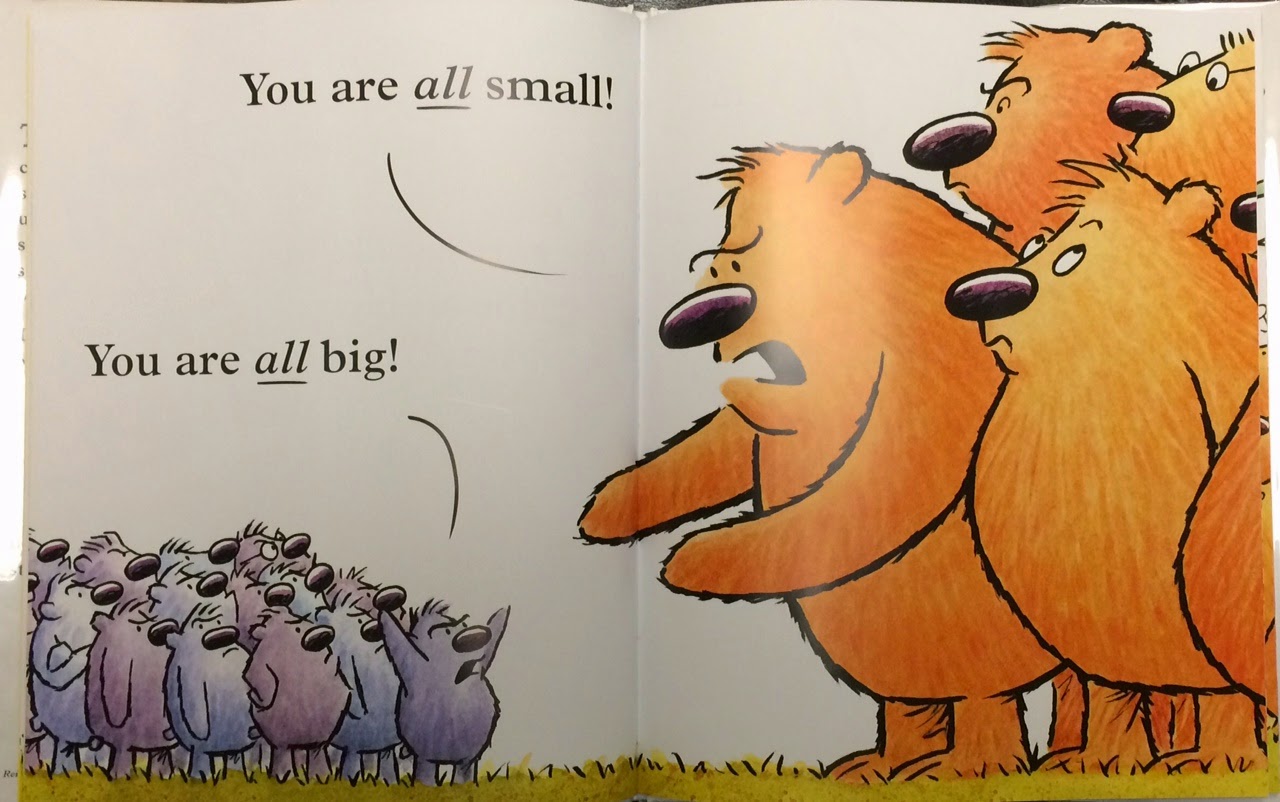 And now I’m totally expecting Dallas Winston to come running in and yell “Don’t you know a rumble ain’t a rumble without me?!?!” and the book to go all The Outsiders on me ‘cause these fuzzy dudes is getting ANGRY! They’re yelling about being big and small and then . . . 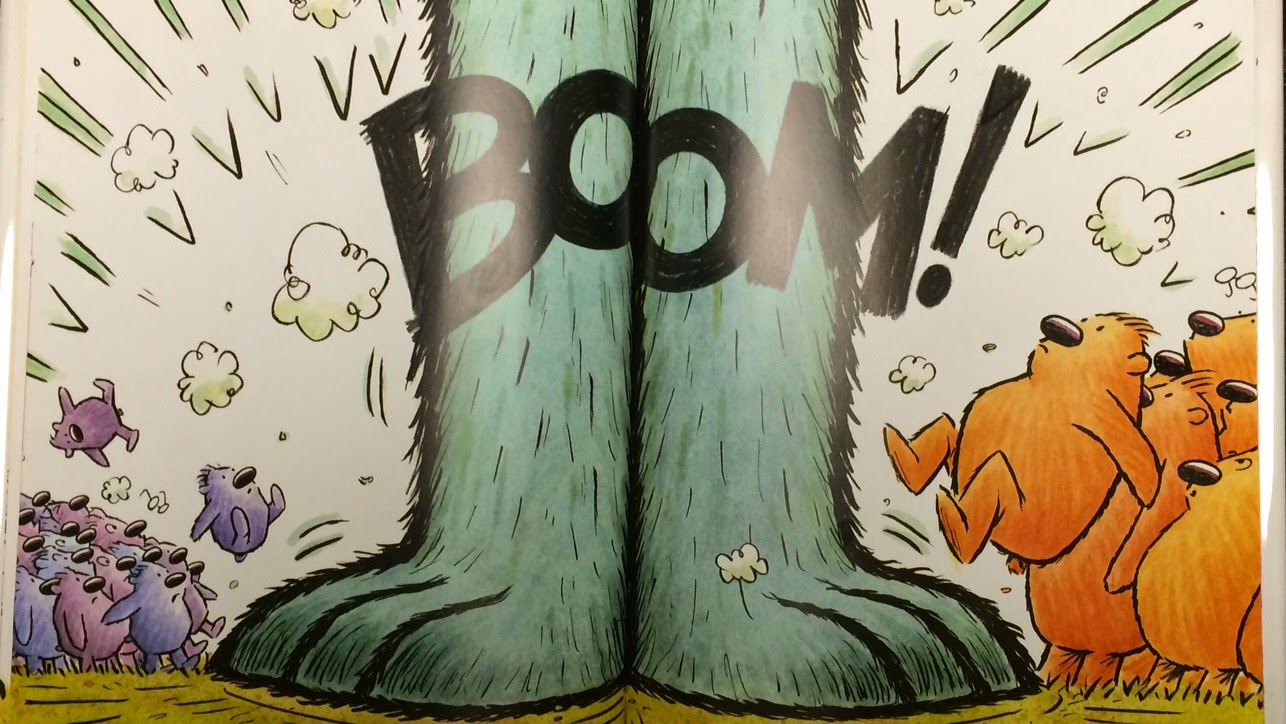 Another fuzzy guy shows up. A blue guy, and he’s HUGE. And then there’s more fuzzy guys. Pink guys, and they’re little pipsqueaks. So now the little guys are actually big compared to the pipsqueaks and big guys are mini-fuzzy dudes next to the new blue guy who is so huge you can only see his legs.

Perspective. It sure can change an argument.

Okay, I’m not sure where that review came from, but that is how the book goes. There’s an argument about size, and both sides of the argument are correct until another perspective is presented. Sometimes we are small. Sometimes we are big. It just depends on who you’re standing next to. Isn’t that what makes the world interesting? Variety?

Kids will love the way the argument escalates without ever really becoming threatening to young readers. (These are just fuzzy blue and orange guys, remember.) The text is perfect for partner reading just like the great Elephant and Piggie books or Duck! Rabbit!, and the ending will lead to plenty of discussion.

And possibly (hopefully!) a sequel.
Posted by Brian at 5:35 AM No comments:

Ivan: The Remarkable True Story of the Shopping Mall Gorilla by Katherine Applegate 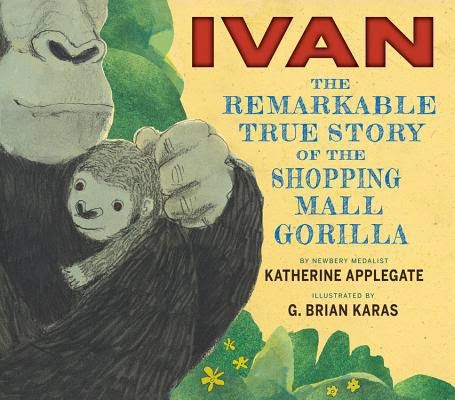 If you haven’t yet read 2013 Newbery Medal winning The One and Only Ivan, you are missing what many consider a modern classic of children’s literature. It’s a powerful story of friendship and protection and identity and freedom and so much more.

Author Katherine Applegate has now added to Ivan’s story, or rather, given readers the true story behind the fictionalized version in Ivan: The Remarkable True Story of the Shopping Mall Gorilla. The book starts with the gorilla’s birth “in leafy calm, in gentle arms.” It tells how the gorilla didn’t learn about humans until it was too late, when poachers stole them from their jungle home. The book describes how Ivan, named in a contest, was raised as a human - sleeping in a bed, going to baseball games, and riding a motorcycle. Eventually Ivan grew beyond his owners’ ability to care for him.

Ivan was moved to a cage in a shopping mall where he became an oddity, an attraction, a way to draw customers. After nineteen pages of Ivan’s life before the mall, only six pages are devoted to Ivan’s life at the mall, but readers will clearly understand the bleak existence. He had a tire and a TV. He sometimes finger-painted. Most of his time was spent watching people watch him. The book concludes with eleven pages on his life after the mall.

This lyrical, nonfiction retelling of Ivan’s story is at times touching and heartbreaking and fulfilling. But I can’t get beyond the page breakdown. Twenty-seven years of Ivan’s life can be covered in only six pages? His life before the B & I Shopping Center - two lives, really - gets nineteen pages. Part of it covers a life of hoots, grunts, and chest-beats, a life with wrestling and chasing and swinging. The other part covers his life of diapers and clothes and a human family. Then twenty-seven years fly by in six pages? How miserable those twenty-seven years must have been!

If this book is read as a companion to The One and Only Ivan, this makes sense. Readers will be fully aware of Ivan’s bleak existence at the B & I Shopping Center (or the Exit 8 Big Top Mall and Video Arcade). Devoting the majority of the book to Ivan’s life before and after the mall gives readers a better understanding of his life as a whole.

While I loved this book, it was not the book I expected. I was looking for straight-up nonfiction like dates, timelines, photographs, and comparisons between factual Ivan and fictional Ivan. There are numerous online resources like Ivan's Wikipedia page, the description of Ivan’s life at Zoo Atlanta, background information from Katherine Applegate’s site, a variety of images of Ivan, and even the videos below, and I thought the book would bring all that information together.

I’ll settle for online research. That’s fine. I’m glad we have this book. Charts and graphs and diagrams and timelines could never communicate the full range of emotions readers experience from this heart-felt look at Ivan’s life. 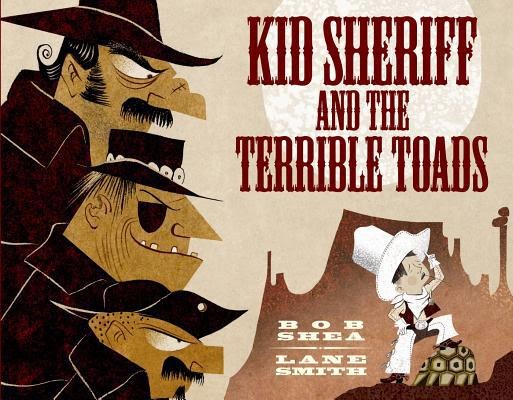 “Why, those Toad brothers would steal your gold, kiss your cattle, and insult your chili. Hootin’, hollarin’, and cussin all the while.”

Now that’s a problem. The mayor was at a loss. Until … until …

Hope rode into town. Slowly. A boy, wearing white, riding a tortoise, and declaring himself the new sheriff. After all, he knows a lot about dinosaurs.

Okay, okay, I hear you. You were interested in the whole wild west thing, bad guys kissin’ cattle and all, and then you read about the tortoise and the dinosaurs and you were like, “Seems a bit sketchy to me. I don’t get it.”

Trust me. Kid Sheriff might not handle a shooting iron, ride a horse, know any rope tricks, or stay up past eight, but he makes a spectacular sheriff. When the bank gets robbed, the mayor suspects the Toad Brothers, and rightfully so. But Kid Sheriff declares it to be the work of T. rex. The stagecoach must be the Toad Brothers, right? Nope. Velociraptors.

Then the Toad Brothers themselves show up in town bragging - or trying to brag - about their antics, but Kid Sheriff has the real explanations. Cattle kissin’? Triceratops. Shoplifting at the mercantile? Allosaurus. And the chili insultin’ varmint was none other than Stegosaurus.

Now the Toad brothers are at a loss. How’s a nasty, gun-slingin’ gang supposed to get credit for their nefarious ways if gold stealin’, cattle kissin’, and chili insultin’ ain’t enough, dadgummit?!?

While you might not see a connection between a tortoise, dinosaurs, and the criminal old west, if you are already familiar with Bob Shea and Lane Smith’s work, you know a collaboration between these two author/illustrators will be something special. Kid Sheriff and the Terrible Toads delivers a goofy story, dastardly villains, a clever hero, and a hilarious and satisfying conclusion in all its absurd glory.

Not a dad-burned thing. Consarnit.
Posted by Brian at 7:04 AM No comments:

Sometimes technology is pretty cool. I was listening to a third grader read Mercy Watson Fights Crime and mentioned that Leroy Ninker, the book’s not-so-hardened criminal, was featured in a new book. “Really?” she asked, putting me on the spot. Hoping my memory was treating me kindly, I pulled out my phone and looked it up. Sure enough, there was Leroy Ninker Saddles Up. We put it in my shopping cart and placed the order.

“We should have it in about a week. I’ll bring it to you first.”

Her eyes lit up, she smiled, and I added another item to the list of why I love teaching.

Then she kept my book! I checked in with her each day to see how the reading was going (fine), was the story good (hilarious), did she finish (yep!), and can I get the book back now (umm…). She wasn’t going to give it back and kept it at home to make sure I couldn’t swipe it!

Do you need any more recommendation than that?

Okay, I think she was just messing with me, but had I said, “Ah, don’t worry about it. You can keep it,” she would NOT have said, “Oh, are you sure Mr. W? It really is your book.” It would have been more like, “Letmethinkaboutitokay.”

Leroy Ninker Saddles Up is Volume One of the new Tales from Deckawoo Drive series. The reading level is stepped up a bit from the original Mercy Watson books making it a great next step for Mercy Watson fans. But far be it from me to recommend a book strictly based on its reading level. Leroy Ninker, now gainfully employed in the concession stand at the local drive-in theater, loves the movies, especially Wednesday nights when the Bijou runs a Western double-feature. He dreams of being a real and true cowboy, but a coworker, Beatrice Leapaleoni, reminds Leroy that being a cowboy is more than a hat, boots, lasso, and tracking ability. What Leroy lacks is a horse.

Until Leroy finds Maybelline. “You are my horse,” says Leroy. “For me, you shine brighter than every star and every planet. You shine brighter than all the universe’s moons and suns. There are not enough yippie-i-ohs to describe you, Maybelline. I love you.” Leroy has a lot to learn about owning a horse, let alone being a cowboy, but his reformed heart is in the right place. Leroy’s affection only grows stronger after a storm separates him from Maybelline, but all is made right after a determined search and a visit to Deckawoo Drive (where toast with a great deal of butter on it and some familiar characters make an appearance).

If subsequent volumes in Kate DiCamillo’s new Tales from Deckawoo Drive series deliver like Leroy Ninker and Maybelline, even more readers will be saying, “Yippee-i-oh!”
Posted by Brian at 5:15 AM No comments: