This Is Just to Say by Joyce Sidman 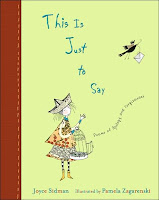 There are a number of things in life that are difficult. Earning straight A's. Learning an instrument. Being nice to your little brother. Staying positive when circumtances seem negative. Batting in the bottom of the ninth with two outs, two on, down by one.

And apologizing. Of course, if a person does get up the courage to apologize, then comes an equally difficult task. Forgiving.

Joyce Sidman has perfectly captured the emotions involved in This Is Just to Say: Poems of Apology and Forgiveness. As Anthony K. says in the introduction, the book is a compilation of letters/poems of apology from each student and the responses received. The first half of the book includes the apologies, and the second half contains the corresponding responses.

Some apologies are for seemingly small infractions: stolen deserts, over-competetiveness in gym class, or rubbing a statue's nose. Some reveal emotions much deeper: the loss of a pet, the desire to live up to a parent's standard, and a child apologizing to her father, believing he left because of her imperfections.

Sometimes the apologies are funny ("Sorry, Ruebs, for belting you as hard as I could in dodge ball. I'd like to say I wouldn't do it again but I'd be lying."). The apologies are heart-wrenching ("I'm sorry, Daddy. Next time I'll be perfect."). Sometimes the apologies don't quite come out as apologies ("P.S. I notice you're not wearing that dress so much anymore. Green is not good on you, anyway. I like the new one, with the blue in it, which makes you look thinner.").

As hard as it is for the students to apologize, the responses show an equal amount of difficulty. A father spends thirty lines telling his son how proud he is of him, how he barely made it through school yet his son is one of the smart kids, how he barely tried academically yet his son accomplishes so much, and the last two lines say, "forget about the window it's ancient history." The whole class forgives an anonymous student who killed the class pet.

And to the young lady who thinks her father's leaving was her fault? "You are perfect. So perfect. It's me who's not. None of the stupid things I have ever done are even close to being your fault."

Another interesting touch, and a realistic one, is that some people can't or don't respond. Others respond in their stead. Mr. Johnson, the custodian, offers words of comfort to Tenzin after Tenzin made the choice to put his dog to sleep. Jewel wrote a poem that included words from her father's letter. DaRon wrote in place of the Florence P. Scribner statue, namesake of the school. Tenzin wrote "for Anthony's mother, who said he was being ridiculous."

I don't think This Is Just to Say would be a hugely popular book for independent reading, but possibilities abound for classroom use. Most simply teachers can use it to discuss the importance of apologies and forgiveness, and of course as part of a poetry unit, but each poem could serve as a springboard to discussions of the topics they address.

Me? I think I'll include This Is Just to Say at the start of next school. And maybe I'll apologize to my previous classes for not stressing the importance of "I'm sorry," and "I forgive you," as much as I could have.
Posted by Brian at 10:18 AM