Every bookstore in Boston has at least one copy of every book featuring Paul Revere, Samuel Adams, the Boston Tea Party, and about a gazillion copies of Make Way for Ducklings. But try finding a copy of Taking Care of Terrific and you're out of luck. (But here's a big shout out to the Boston Public Library which had a copy on the shelves where I was able to quickly review it on our last morning there.)

Enid hates her name, and face it, you don't blame her. Especially if you were fourteen. Enid. Putrid, sordid, horrid, acrid, viscid, squalid, and worst of all, fetid. Enid. She lives two blocks west of the Public Garden on Marlborough Street with her parents and Mrs. Kolodny, the housekeeper who gives her more attention than both parents combined. One summer morning, out of the blue, Enid gets a phone call asking her to babysit afternoons for a 4-year-old.

Joshua Warwick Cameron IV. With a name like that it only fits he'd get babysitter named Enid.

Afternoons are spent breaking the rules Ms. Cameron has put into place. They pet dogs, eat popsicles, pick up worms and caterpillars, and talk to strangers. Without that last one, they'd have never met Hawk the saxophone player or a bag lady who knows a great place to pee at the Ritz-Carlton. Of course they'd have never organized a bag lady protest of the popsicle cart guy or the great Swan Boat heist of '83 either.

If you babysat a boy who has never eaten pizza or popsicles, what would you do? What if he never got candy or had never taken a bubble bath? What if he'd never ridden the Swan Boats?

Her plan doesn't go as planned. No matter how cute a 4-year-old is, when he's heir to the Cameron Fortune, "borrowing" him to ride the Swan Boats in the middle of the night suddenly sounds a lot like kidnapping. And kidnapping brings police and TV cameras and bright lights and lawyers and negotiating and being in your bedroom for a week. Or more.

There are a number of dated references (Donahue, Bo Derek in "10," Jane Pauley on the Today Show, and Saturday nights watching The Love Boat and Fantasy Island) but readers should be able to think, "Donahue. Hmm. Sounds like Dr. Phil." (And I rather enjoyed the brief flashbacks.)

After all is said and done, Joshua survives the ordeal unscathed (actually, he's better off for it), and Enid successfully helps numerous people flourish and bloom like newly trimmed flowers once neglected. All with popsicles and Swan Boats.

Stealing the Famed Swan Boats: Still, probably, not so good, but in this story, it's just what these friends need.

Below you can see pictures of houses on Marlborough Street (Enid lives on the fifth floor), a house on West Cedar Street as viewed from Acorn Street (two views), and the statue of George Washington in the Boston Public Garden. (No, I don't know who that is with the blue umbrella.) 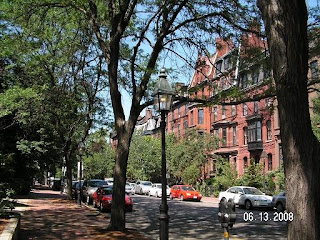 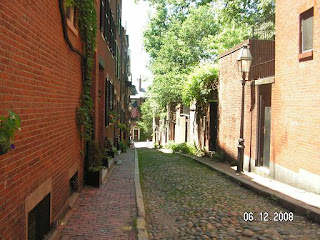 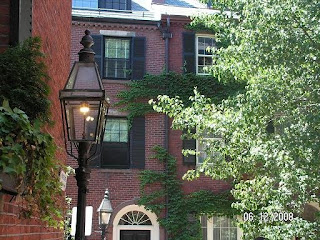 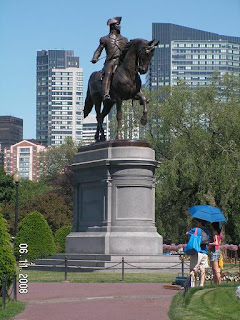