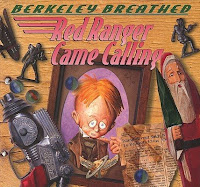 Any Christmas story that’s true, guaranteed true, especially, better deliver with A. a good story and B. proof of its truth. Red Ranger Came Calling does both.

Berkeley Breathed tells the story of his father as a nine-year-old and the events surrounding Christmas in 1939. His father, Red, was sent to stay with Aunt Vy on Vashon Island. Red emulated the famous movie hero of the time, Buck Tweed, Red Ranger of Mars, Protector of the 23rd Century and Savior of Grateful Princesses. It was Buck Tweed that instilled in Red a desire for the ultimate Christmas gift: an official Buck Tweed Two-Speed Crime-Stopper Star-Hopper Bicycle.

Unfortunately, at this time in history, “dreams were unaffordable.” The best his Aunt Vy could do was a Buck Tweed space uniform which, upon further inspection, turned out to be last year’s pajamas, dyed red, and creatively altered.

A sour-faced little boy, Red never gave much thought to the feelings of others, Aunt Vy and her creativity amidst the circumstances included. In bed that evening, Red remembers local resident Saunder Clos, the recluse some locals believe to actually be the Santa Claus, and the mysterious pointy-eared man he saw headed towards Clos’s house.

So Red does what any respectable Red Ranger of Mars would do. Investigate. Normally cynical and disbelieving, a glimmer of hope now flickers within Red. He sneaks out his window. Ignoring the broken toys littering the walk to the Point Robinson lighthouse and the sign which reads, “Visitors Not Received With Zesty Jolliness at the Moment,” Red makes his way inside where he accosts the miserable miser. “Go home,” the man says. “I’m 435 years old, which makes me … very tired.”

So Red shot him with his disintegrator ray gun. Pop! Suction cup dart on the forehead.

But Red ignites something in the old man. Can he still make a reindeer fly? Can he still fulfill wishes, even those of boy not usually inclined to wish? Saunder Clos decides to try. And so does Red. The events of the evening persuade him to wish, despite his mind’s expectation of another disappointment.

He wishes, hoping his wish won’t fall on deaf ears, even though the old man’s ears are, nearly, literally, deaf.

And Christmas morning brings … nothing. No surprise. No sadness or self-pity. Not even disappointment. Nothing. Except anger. Red had allowed the old phony to trick him into the unthinkable. Faith in grown-ups.

And the old man was gonna hear about it. But upon arrival, Red discovers something much more important, a gift he gives to the old man. Red also discovers that Saunder Clos (or is it Santa Claus?) did indeed deliver on the promised bicycle. Exactly as he heard Red wish it.

Oh yeah. The proof. Here it is. Don’t believe me? Don’t believe Mr. Breathed? Do your own Google search. Here, I’ll save you the time: Vashon Island Bicycle Tree. 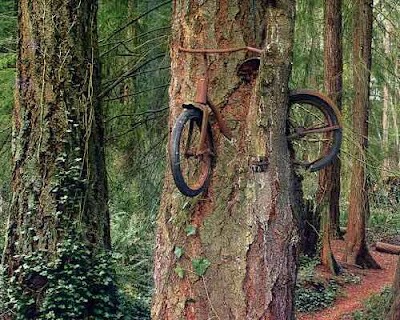