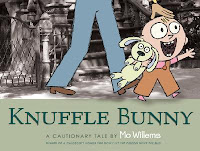 Knuffle Bunny and its sequel, Knuffle Bunny Too, work great for a mini lesson on predicting. Begin by reading Knuffle Bunny, stopping to model predicting. My first planned prediction was at "Trixie realized something." What did she realize? Then, as they progress home with Trixie trying to explain with her "Aggle flaggle klabble!" and "Wumby flappy?!" my plan was to predict some more. What would she be so panicked about?

My fourth graders noticed immediately, however, that Knuffle Bunny was in the laundry basket and then in the washer. When they pointed that out, I did an unplanned prediction. I mentioned my favorite Oscar the Grouch from childhood and we discussed the blankets or pillows or stuffed animals everyone had (eh-hem, have) and what it would be like to leave it behind. That got them talking immediately. I predicted a Trixie meltdown.

So, now back to my plan, I paused again at "But Knuffle Bunny was nowhere to be found...." and opened up the discussion to student predictions. What do moms and dads do when a favorite toy is lost and the child is giving the puppy dog eyes and quivering frown? Get a new bunny? Tear the place apart? They seemed to be in agreement that Knuffle Bunny, whatever the cost, would be found. 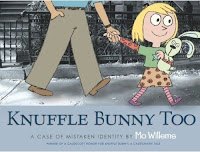 We then progressed on to Knuffle Bunny Too. Trixie is now older, quite a talker, and headed to Pre-K. She has great plans to show Knuffle Bunny to Ms. Greengrove and all her friends. Our first prediction was when "Trixie saw Sonja." What would cause Trixie to have those big eyes and shocked expression? What's up with Sonja?

After continuing through their conflict, including an argument over the correct pronunciation of Knuffle ("Kuh-nuffle," says Trixie. "Nuffle," says Sonja.), Ms. Greengrove takes away the two instigating bunnies, exiling them to the top of the cabinets. The rest of the day progresses nicely until the middle of the night when "Trixie realized something." Prediction time...what did Trixie realize?

Then Trixie marches into her parents' room and announces, "That is not my bunny." The next page, which I didn't show, says, "Trixie's daddy tried to explain what '2:30 a.m.' means." This is where I stopped and sent the class back to their seats to predict what would happen.

Many kids predicted a late night solution of some kind. Some even predicted that Trixie and Sonja would become friends. No one, however, predicted that they would intentionally trade bunnies the very next day. This allowed us to discuss the fact that good predictions, based on prior knowledge and information from the book, are not always right. Or, to put it more positively, was your prediction correct or did the author surprise you?