It's a Book by Lane Smith - Survey Results 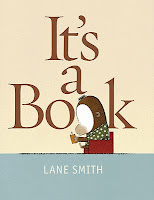 A few days ago I set up a simple survey about It’s a Book by Lane Smith.  It is admittedly a very unscientific survey, but it gathered some information, and that was the intention.  (Here’s my original post and the survey.  Opinions are still welcome.)  Here is a summary of the results.
All the respondents were either teachers or librarians, but several people checked numerous boxes, like the teachers who are also parents.
Completed Surveys = 32
Was it funny?  Yes = 31  No = 1
Have you read the book?  Yes = 25  Read about it = 7
Should it be in a school library?  Yes = 11  No = 16
Should it be in a public library?  Yes = 28  No = 2
Teachers who would read it aloud to their class:  Yes = 1  No = 7  Yes, but edited = 16
Librarians who would read it aloud to a group: Yes = 1  No = 5  Yes, but edited = 2  Maybe = 1
Parents who want the book read in their child’s class:  Yes = 0  No = 4  Yes, but edited = 3
About half of the respondents left comments, and most of them focused on the use of the word Jackass.  Here’s a sampling:
Thank you to everyone who took the time to respond.  Anyone who would like to share their opinions can still complete the survey or leave a comment below.  Thanks again.
Posted by Brian at 9:45 PM