The House in the Night by Susan Marie Swanson 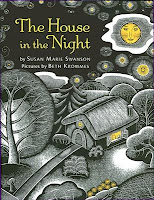 After The House in the Night won the Caldecott Medal, and having just finished a student-selected mock Caldecott with my fourth graders, I read the book aloud to my class. Their response? Shifty sideways glances. A few unintelligible mumbles. Mostly just awkward silence. Finally one brave girl slowly raised her hand and said, "Well, it was kinda boring."

Fair enough, I thought. This is the bunch that overwhelmingly favored A Couple of Boys Have the Best Week Ever and Beware of the Frog in our mock election. Plenty of humor, bold pictures, and enough text to keep the ten year old mind interested. One student described The House in the Night as a lullaby (a great observation), gold is the only color, and it has fewer then ten words per page.

To be fair, they appreciated it more after we discussed how the pictures were created using scratchboard. Some students pointed out that the bird in the girl's book seemed to grow larger each page until the outline of the bird was incorporated into the other illustrations, then got smaller until it was back in its book. Some saw it, some didn't, but good art does that to the observer, doesn't it?

Our art teacher, however, had a different opinion. I showed her the book, and she refused to return it. (It's not even my copy! I got it at the public library.) I saw it the next day, open and upright on a table in the art room, as sixth graders studied the pictures before beginning their own scratchboard projects. They were captivated by the detail and accuracy of the etchings.

The House in the Night had found a home in the art room. That shows the Caldecott worthiness of Beth Krommes' illustrations. It also will be at home in the bedroom, just before lights out, as little ones curl up on a parent’s lap to share the girl’s teddy bear, her story, her goodnight kiss, and her good night’s sleep. And that proves the kid worthiness of Susan Marie Swanson's story.
Posted by Brian at 7:28 AM