The Pencil by Alan Ahlberg and Bruce Ingman 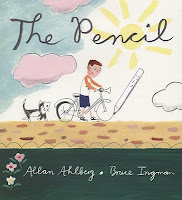 When Banjo and Bruce and Mildred's snacks couldn't be eaten because they were black and white, the pencil drew a paintbrush. Soon there were extended families and checkered table cloths and a ball named Sebastian. And all seemed well.

Then the problems began. Banjo kicked Sebastian, and it hurt! A window was broken. Some people complained to the pencil. They didn't like their hats or shoes or big ears or unhealthy habits. (Grandpa smokes a pipe.) So the pencil does the only thing he can think of. Draw an eraser.

And that's when the problems really begin.

The mischievous look on the eraser's face immediately give warning to readers that he's got something planned. Pretty soon the pencil's creation is disappearing just as fast as he can create it. Nothing he draws is able to stop the eraser ... until ...

Well, I'll let you find that out for yourself. Kids love predicting what's going to come next. What will the pencil draw to take fix the black and white snack problem? How will the pencil try to fix his creation's sudden problems? How will he stop the renegade eraser? Another part kids love are the names of all the items, and the end pages share the most creative ones. There's a box named Deirdre, a birdcage named Ramona, shoes named Edward and George, and plenty more.

Kids laugh at the text, like all the characters (a bone, a ball, a family of ants) that ask, "What's my name?" Then they laugh at the ball's, I mean Sebastian's sad face and the close up of the newly named, picnic-crashing ants. Kids are even tempted to reach out to rub the eraser's shavings off the page.

And, of course, they cheer at the happy ending.
Posted by Brian at 7:36 PM