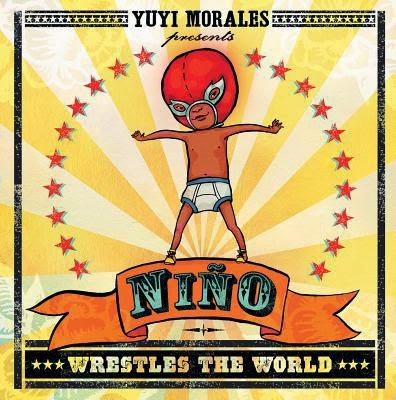 If you are looking for books that will engage young readers, do you really need to look beyond the cover of Niño Wrestles the World by Yuyi Morales to know the book will do just that? Seriously. There’s a boy in his briefs, wearing a professional wrestler’s mask, standing on a banner that proclaims “NIÑO” in bold letters, surrounded by stars, in a champion’s pose. The cover illustration itself screams, “Winner!”


Rest assured the rest of the book is a winner as well. “Señoras y señores, put your hands together for the fantastic, spectacular, one of a kind . . . NIÑO!” comes an announcement as Niño laces up his mask. What follows is challenge after challenge from out-of-this-world contenders.


Las Hermanitas! Fresh from their afternoon nap! They tackle. They hold. They tickle. They stop at nothing and nearly give Niño the ultimate in wrestling shame - an unmasking!


Ah, but Niño didn’t become amazing and mighty by giving up easily. Will the mighty Niño take a mighty fall? Could Niño’s final match turn out to be his greatest victory? Tune in next week . . .


At first I struggled with some pronunciations, but thanks to our resident Spanish II student (my daughter) and the book’s endpapers, reading the book like a true wrestling announcer is possible. The endpapers feature pictures of each of Niño’s opponents along with their name, pronunciation, and description.


I thoroughly enjoyed Niño Wrestles the World, and I’m pretty sure that a great many kids will too, and not just those masked marauders in their briefs ready to take on all comers.
Posted by Brian at 1:29 PM