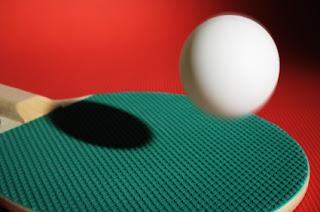 Now that the weather is swinging towards summer, we're not in the basement quite as much as in winter. But the games are ongoing, and the lesson I'm quickly learning (or the lesson the boy is teaching me) is changing: Get used to it, Dad.

Last night, the boy beat me.

Now I'm not saying I enjoyed losing, but my streak was approaching rare company -- Wooden's UCLA Bruins, the '72 Dolphins, DiMaggio's 56 -- and frankly, the pressure was building.

To be sure, I have registered an official protest with the commissioner's office, but so far the boss (aka Mom) has refused to issue a ruling on the contentious contest. So as of now the boy's table tennis victory stands, and his full-out, arms raised celebratory sprint throughout the entire house was not in vain.

Let's recap. The score stood 20-17 with the old man in the lead when my return clipped the top of the net but luckily trickled over to the boy's side. Game over.

"Nope!" he yelled, waving his arms and paddle. "That's my point 'cause it hit the net."

"What? You know that only applies on a serve."

"Whatever. My serve. 18-20." And he promptly skipped his next serve past my unprepared, weak side.

"Hold on. This game is already over," I insisted. "Why are we continuing?"

His only response? "19-20," and another quick serve that I returned straight into the net.

"This game is over! I already won, and you know it," I argued.

"Dad, please." He looked at me as if I'd just suggested tofu at a tailgate. "Serve."

Two serves later -- one short into the net, one long onto the floor -- and the boy was off and running. Up the stairs, down the hall, circle in the bedroom, back down the hall, around the kitchen table, and down the stairs back to where he found me waiting.

"I already won," I reminded him. "Why are you making a scene?"

"Nah, I think you've had enough for today." And he turned and floated out of the room.

Defeating Dad ranks with game seven victories, the 12 seed beating the five, walk-off home runs, and knocking the defending champs out of the playoffs. The stakes might not be as high, but then again, hit a walk-off home run and the pitcher doesn't have to tuck you in bed later. When a boy beats Dad, the vanquished still has to live with the victor.

This quest to give Pops a paddling encourages creative strategies. Rules change. "I get five extra armies this turn," a boy might say mid-game in Risk. Do-overs are called. "That's not an out even though you caught it because I wasn't ready. Do-over." How can the boy see the pitch, swing the bat, hit the ball and not be ready? Doesn't make sense.

What boy doesn't arm wrestle his dad? And what boy doesn't end up standing, two-handed, elbows aloft, and jumping to put his full weight on Dad's arm?

As I watched the boy disappear, I remembered a recent game of darts in Grandpa's basement. My father, my son and me. And I had the lead. A big lead. A don't-hand-me-three-darts-'cause-I'll-only-need-one sort of lead, when ... well, you know what happened.

I folded and Grandpa beat us both.

You know what? Maybe I'll withdraw my official protest with the league commissioner.