The Lion and the Mouse by Jerry Pinkney 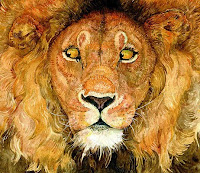 I generally don’t follow all the pre-Caldecott buzz, but apparently there has never been less suspense than in January of 2010, when everyone and their mother’s librarian expected Jerry Pinkney to take home the medal for The Lion and the Mouse. The Caldecott Medal is awarded for a book’s illustrations. In fact, in the official Caldecott Terms and Criteria, the word author only appears once. Artist appears eight times.

And from first glance onward, it is easily apparent that Jerry Pinkney is an artist by anyone’s definition.

Readers will be able to move through the book quickly, but The Lion and the Mouse begs for an immediate reread. Right from the title page, where the mouse finds himself in paw prints larger than he is, readers will study the remarkable illustrations that reveal more details with each look.

Nearly wordless, the pictures are left to tell the story. Most readers will be familiar with the story already, and my guess is that children who encounter the story for the first time via this book will have an adult leading them through it.

But I wonder if a familiarity with the story is necessary for kids to understand the book independently. For example, kids will see the mouse climb on the lion and see that the lion has captured the Mouse, but why is the lion so mad, and why does he suddenly let the mouse go? More importantly, is it even necessary to know the mouse woke the lion up from a nap? Is the conversation about how someone so small could never help someone so big needed? Do readers need to hear the mouse plead his case?

Maybe the fact that the lion lets the mouse go is reason enough for the Mouse to free the Lion from the hunter’s trap. Maybe a simplified story – lion frees mouse, mouse repays debt – works just as well as the one with a moral about friendship.
Posted by Brian at 9:07 PM