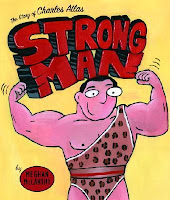 Maybe it was from my own comics, or maybe from the few comics my dad had kept and I reread, but I really do remember the Charles Atlas ads imploring, “Let me PROVE I can make YOU A NEW MAN.” The ads showed, in only eight comic panels, insult, humiliation, anger, determination, vengeance, and victory, and how a 97 pound “runt” can become “The World’s Most Perfectly Developed Man.”

Strong Man: The Story of Charles Atlas begins with the arrival of Angelo Siciliano at Ellis Island. It describes his tough Brooklyn neighborhood and a beating he took from a local bully. Then readers are presented with the scene made famous in the comics. Sand is kicked in Angelo’s face at the beach, humiliating him in front of his date. I always thought the event was fiction, created simply to separate young 97-pound runts around the country from their dimes, but apparently it’s real. Nevertheless, it’s the event that changed Angelo Siciliano into Charles Atlas.

Strong Man goes on to describe his incredible feats of strength like tearing phone books in half, bending iron bars, lifting young ladies above his head, and pulling a 145,000 pound train with his bare hands. [Feel free to reread that last line in your best, deep baritone. Adding your own dun-dun-duuuuuh! adds a little panache.]

Charles Atlas’s fitness course encouraged more than physical strength. Charles encouraged youngsters to eat right and clean their rooms and not to laze about in bed. (Hmmm … I wonder where Hulk Hogan, 1980’s WWF icon, got his famous, “Train, say your prayers, eat your vitamins, be true to yourself, true to your country, and be a real American!”?) Charles had a passion for fitness, that’s obvious, but also encouraged others, both kids and adults alike, to “take charge of your life."

Strong Man ends with suggested exercises for kids and a note for parents about the importance of activity in children’s lives. The author’s note gives more detail about Atlas’s life, including how he modeled what he preached, but also asks the question, “Who really was Charles Atlas?” What’s myth? What’s reality? How much of the Charles Atlas legend is based on fact and how much has it been exaggerated or embellished?

No reading of Meghan McCarthy’s book would be complete without looking at the original ads. The whole thing – comic books, “97 pound runt,” 32 page illustrated book, change-your-life-all-for-just-ten-cents – appears at first glance to be a plot for one man to get rich quick, one dime at a time. But Strong Man lets readers learn the story behind the bulges.
Posted by Brian at 1:26 PM