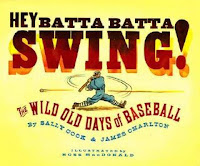 Last night I watched the Milwaukee Brewers beat the Astros and tie the Cubs for first place. So in honor of the First Place Milwaukee Brewers (that sounds great to a Brewer fan, and if you don't believe me, click this out) here's a book subtitled The Wild Old Days of Baseball. What's wilder than these sweet uniforms from 1982? The Brewers in the World Series? Are you kidding me? They haven't made the playoffs since then, the longest post-season drought in the major leagues (not counting the Montreal Expos who were robbed of one in 1994). Twenty-six years and no playoff appearances. Even the Red Sox broke the Curse of the Bambino and won two - TWO - World Series since then. The Cubs even sneak into the playoffs every couple of years, only to fall victim to the Curse of the Billy Goat. Yep, Harvey's Wallbangers sure seem like the wild old days of baseball, at least for most Wisconsin sports fans.

So I want to post this before anything happens. Sure I'm confident. Sure I think the Brewers are due. But I'm also a realist. They may not - maybe - be in first place for long. So, as I said, in honor of your First Place Milwaukee Brewers, here's Hey Batta Batta Swing! The Wild Old Days of Baseball by Sally Cook and James Charlton.

Hey Batta Batta Swing goes back to the earliest days of baseball, played in pastures with wool uniforms. All sorts of history is given from uniforms and equipment to rules and how teams have broken them over the years. Baseball words are included throughout the text with handy definitions in the margins. So if you want to know what it means when someone says, "That guy's normally the team's ace, but his high heat wasn't working, so after an easy can of corn, he gave up a frozen rope gapper and two gopher balls in the opener of a twin bill before the manager gave him the hook," then this is the book for you.

Learn about Murderer's Row and the origins of numbers on unforms. Learn about player nicknames and team nicknames (the Spiders, Blues, and Naps all were the same team, and they still exist today). Even umpires get a section about their uniforms and equipment.

As the book progresses through history, the connections to today are constant. Baseball has the longest history of sports in the United States - traditions, records, and even superstitions. It's all in there.

Here's hoping the Milwaukee Brewers return to their wild old days too. (I just hope the result is a little better than 1982.)