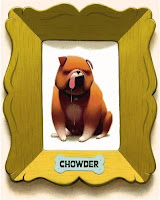 When the opening page says, “Chowder had always been different,” and features a bulldog on a toilet, well, you know you got yourself a … well, uh … Okay, I’m not exactly sure what you’re supposed to have given those circumstances, but that is indeed how Chowder starts.

And it’s downright funny. Chowder wears an archeologist's hat and makes dinosaur shapes in the dirt with his bones while the other dogs just chew theirs. Chowder reads the paper. He stubbornly takes time to smell the flowers. He enjoys music and dancing, the Internet, and his telescope.

Eventually his desire to fit in, despite his ability to stick out, brings him to a petting zoo. Critters! Potential friends! In his excitement he promptly loses the critters’ kickball. Great start, eh? Then Chowder’s determination to remedy the situation finds him dangling, literally, by the skin of his teeth.

He is rescued by his (yes!) new friends who proceed to do what any new friends would do: teach Chowder the ins and outs of kickball. And he fits right in.

The pictures of Chowder are hilarious. I didn’t know bulldogs had an expression that is equal parts concentration, relaxation, and satisfaction, but Chowder does. (That’s in the opening picture. See: paragraph one, above.) Chowder’s tongue nearly has emotions of its own. Sometimes it dangles and drips, like when he reads the paper, and sometimes is flaps and sprays, like when he dances.

I don’t think Chowder will win any literary awards, but if you think bulldogs driving cars and topping pyramids and leaping out windows will make you laugh, then giggle away. Chowder’s your dog…and your book.
Posted by Brian at 2:45 PM