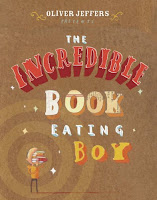 Well, let's start at the beginning. "It all began by mistake one afternoon when he wasn't paying attention..." (Matter of fact, I must not have been paying attention since I didn't notice this until the third time I read the book.) Henry is holding a book in one hand and a popsicle in the other when he notices the cat doing something rather nasty on the carpet. While distracted, he accidentally licks the book instead of his fruity frozen snack.

Hmmm... He tries a single word. Then a sentence. Then a whole page. By Wednesday he'd eaten a whole book. Soon it's just, GULP! One book!

Henry discovers that the more he eats, the smarter he gets. He helps his father with crosswords. ("Monumental," he whispers over Dad's shoulder.) He's even smarter than his teacher. Really! He figures he could become the smartest person on Earth!

But Henry's habit gets out of hand. He's eating too many too quickly. One day a book doesn't sit right in his stomach, and readers get to learn a new vocabulary word. Boke.

Henry's digested knowledge gets all mixed up. He starts saying things like, "6+2=3" and "2+6=elephant." Finally, again almost by accident, Henry opens a book. He reads it. He loves it!

And now Henry figures he could still be the smartest person on Earth, but it will just take a bit longer.

Pay close attention to the pictures. There's tons of great stuff in there, like the cat I failed to notice the first two times I read it. Keep an eye on the backgrounds too, like the dictionary page with "intemperance" as a guide word behind Henry swallowing another book. The pictures remind me of No, David by David Shannon and the illustrations of Lane Smith (The Stinky Cheese Man, The True Story of the Three Little Pigs, and many others).
Posted by Brian at 10:14 PM